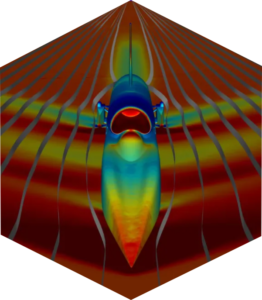 Example of an aerodynamic heat map.

Aerodynamics is a sub section of fluid dynamics that focuses on the interaction between moving objects and the air around them. Air is a gas which means it is a continually deformable medium. Essentially this means that it will change its shape in order to completely fill the container it lies in. When a shear force is applied to a gas, it will deform until the net force is reduced to zero.

The maths required to simulate this model is incredibly complex but there are some fundamental physical laws that can be used to describe the dynamics of air.

Another helpful quantity for analysing the behaviour of fluids like air is their density. This can substitute for the mass in some equations as the density is an inherent property of the fluid that does not change with the amount of fluid present. We can express the pressure of a fluid in terms of the density(ρ): P = ρRT. Where R is the universal gas constant. 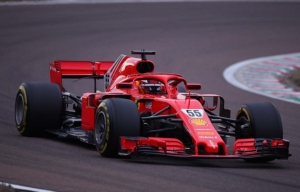 Aerodynamics play an essential role in the design of all modes of transport today. One needs only to compare the design of cars from 100 years ago to those of today to see the influence that aerodynamics have had. Sharp edges have been changed to smooth curves to reduce drag and wind shields slant back towards the driver rather than being almost perpendicular to the bonnet. High speed trains have a distinct cone shape at the front in contrast to the flat cylindrical noses of the 19th and 20th century.  Aeroplanes as the name would imply rely almost entirely on aerodynamics to take off and maintain flight.

When focusing on cars, aerodynamics impact their performance in 3 key ways.

The aerodynamics of a car also plays an important role in many other aspects of automobile design such as engine cooling, airflow in the passenger compartments and using air to carry water droplets and dirt off side mirrors and headlights.

While aerodynamics does not wholly govern the design of consumer cars, as aesthetic choices need to be factored in as well, it is the main influence in the design of performance vehicles. This is very clearly demonstrated in the differences between Formula 1 cars and Land Speed Record vehicles.

The Aerodynamics of Formula 1:

Formula 1 cars are amongst the most advanced automobiles on the planet in terms of technology and aerodynamic developments. It is these aerodynamic capabilities that see F1 cars speed through corners well in excess of 200 km/h. For example, the 130R corner at Suzuka race track, Japan regularly sees drivers take the corner at speeds of about 300 km/h. The fact the car is able to do this is because of the aerodynamic concept of downforce. Much like an aeroplane generates lift in order to fly, an F1 car generates downforce in order to push down against the ground, generating grip.

There are three main components of the car that allow this to happen.

Both the front and rear wing work in a similar manner to each other. They work by directing the incoming air around them. This causes areas of low pressure in and around the underside of the wings. This causes almost a “suction” like force, which sucks the car to the ground. The two wings combined generate up to 50% of the overall downforce generated by the car.

The final 50% or so of downforce is generated by the underside of the car and the diffuser. Incoming air is redirected by the front wing and other aerofoils on the sides of the car, such as the bargeboards, underneath the car. Much like what happens around the wings, a large area of low pressure is formed and sucks the car to the ground. This is in essence, how all the downforce of the car is generated. By today’s regulations, F1 cars weigh upwards of approximately 700 kg and at speeds of 150 km/h and above, the downforce generated can exceed 2000 kg of force. This is what allows the cars to navigate race tracks, rarely dropping below 150 km/h at any point.

The high forces generated have begged the question within the scientific community about whether or not F1 cars could drive upside down. Since the forces generated greatly exceed the weight of the car, in theory it should be possible, however, due to safety concerns and technological restrictions with operating an engine and components upside down, a test has never actually been carried out.

Bloodhound is the vehicle created with the aim of breaking the current land speed record of 1,228 km/h. The previous vehicle responsible for this record is referred to as ThrustSSC which is the first land based vehicle to break the sound barrier.

Initially, computational fluid dynamics (CFD) was used to calculate the pressure distribution that would occur across the surface of the car. These models were used to improve the design of the car before eventually, real world tests were used to ensure that the simulated model was accurate.

Since the vehicle aims to travel at supersonic speeds, there are several challenges that the engineers must overcome. Arguably the biggest challenge to overcome in terms of aerodynamics for Bloodhound is the inevitable shockwave it will experience when the vehicle reaches the speed of sound. The engineers responsible for the design of the car had to accurately predict the points at which the shockwaves will occur and the potential damage done by shock reflections.

An Investigation of the Effectiveness of Nuclear Energy as a Potential Solution...
Scroll to top