Research into employing the unique and exciting properties of nanoparticles in the medical field has been expanded largely in the past decade. With the technology developing constantly to not only study the particles properties and how we can apply them, but the leaps and bounds that have taken place in our ability to synthesize them to a high quality. There are many exciting applications of nanoparticles in the body being researched worldwide but in this blog we will be looking at a few that have really caught our attention in areas such as detection, therapeutics and drug delivery systems . 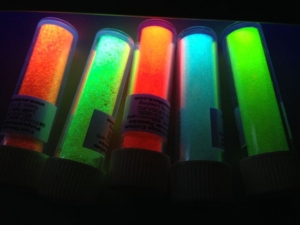 Quantum dots are one of the contributions with the highest expectations that is being developed in the field of nanoscience. Quantum dots are nanoparticles that can be illuminated with different colours, the colours of these points vary depending on the wave frequency and the size of these points, due to their semiconductor-like properties. This  method is used for detecting diseases and viruses, such as malaria and cancer, depending on the colour of the light that these points give off. They’re already being used in hospitals to detect tumours and being used to study the DNA of people to try to predict possible inherited diseases that can develop in the body over time. While they are toxic due to their components, by surrounding them with biocompatible materials there are countless applications in the field of biotechnology These quantum dots can be the next step in understanding cell-cell interactions that occur within the human body, like certain diseases such as cancers, as there is currently no great understanding of how they occur.

Gold nanoparticles have received great interest due to their particular properties such as biocompatibility and high stability, as well as their malleable size, shape and cytotoxicity. Due to their biocompatibility with antibacterial drugs a possibility for a new generation of antibiotics may be in the near future. This is an important development due to increasing levels of drug resistant bacteria. While antibiotics is one area, gold nanoparticles are being researched for another huge find which is their impact on cancerous cells. After realising their cytotoxicity effects on this disease they have become a hope for a new advancement in anti-cancer treatments. This is where their modifiable shape and size properties have been seen to adjust the nanoparticles level of cytotoxicity, possibly allowing varying damaging effects depending on the aggression of the cancer cells. This use of gold nanoparticles as an anti-cancer therapeutic combined with the following research in polymeric and carbon based nanoparticles could lead to a significant impact in the fight against cancer.

Polymeric nanoparticles are establishing a new path to drug deliveries methods in the body. These particles are synthesised into 3D shapes to act as nano-carriers in which we can wrap around drugs needing to be administered. The drug will then be driven to the specific place in the body where it’s needed as the polymeric nanoparticle decomposes to release the drug at this site. Due to the components of polymers being non-toxic to the body this allows for safer drug delivery of toxic materials and controlled dosage to the site in the body. This travel and release mechanism is hoped to be controlled almost entirely by the size of the nanoparticle, so while much research is focusing on developing this type of mechanism, a huge effort is also needed for the production of such detailed particles. This method of drug delivery is being looked at by many medical researchers in areas such as cancer therapy, vaccination development and targeted antibiotics.

Carbon nanoparticles could also be a step in achieving instrumental progress in the fight against cancer. Carbon nanotubes used as drug delivery vehicles in cancer treatment have gradually been shown to give more effective drug distribution across the cancerous region and facilitate improved longevity in the body. Further research is needed but it is hoped that this new drug delivery method could greatly help in the quality of life of cancer patients and extend the current timeline of people unfortunate enough to develop this illness. Carbon-based nanoparticles in the form of nanodiamonds have also been employed recently to combat chemoresistance, which is the ability of the body to prevent effective chemotherapy. In recent tests these particles managed to greatly reduce tumours in mice and disable chemoresistance mechanisms from within so the treatment can be more successful. Should this research continue to yield promising results chemotherapy could prove to be much more reliable and hopeful for struggling patients and families.

So while nanoparticles are considered by many just as an area of study for electric circuits and biodegradable plastic, it’s a much broader area of research extending largely into biology as we can clearly see from these exciting future paths in nanoscience. These areas of research give hope particularly towards cancer as one of very few diseases science has failed to overcome it truly is the biggest obstacle in the field of biomedicine. These developments offer a glimmer of hope that this battle is swinging in our favour and so we hope to see these paths progress to helping many around the world in need of medical attention in the next two decades.

The science of color is sometimes called chromatics, colorimetry, or simply...

Comparing and Contrasting the Operation, Efficiency and Application of Various...
Scroll to top