Looking up at the night sky is the perfect way to experience the beauty of physics from home. From your own back garden, with no astronomy equipment, you can witness some fantastic physical phenomena. There is more to see out there than stars. Auroras, moon halos, International Space Station passings, and meteors are just a few of the phenomena that we can see with the naked eye. Keep reading to find out what to look out for the next time there’s a clear night sky, and to discover the physics behind these occurrences!

What is an aurora and what does it look like?

An aurora is a naturally occurring light display seen in the most northerly and southerly regions of the Earth. They show a spectacular range of colours including blue, green, and red tones if you are lucky enough to see one overhead. If observing one from further away, auroras can look like a sunrise in an unusual location because of the colours along the horizon.

What causes an aurora?

An aurora starts with the sun. The sun is always emitting hydrogen and helium from its hot surface and these particles travel towards the Earth as solar wind. They don’t generally make it to the Earth’s surface, however, as they are deflected by the Earth’s magnetic field, the magnetosphere. Sometimes, the sun will emit a lot of particles from its surface, the corona, in the form of a gas ‘ball’. This is known as coronal mass ejection. When this massive ball reaches the Earth, it strains and overpowers the magnetosphere, and some particles now make it through to the Earth. When the high energy atoms from the solar wind collide with neutral atoms in the Earth’s atmosphere, energy is given off in the form of light. The colour of the light depends on the element. Oxygen produces green and red colours while nitrogen produces blue and purple colours. The abundance of these elements in our atmosphere explains the beautiful bright colours of auroras.

Could I see an aurora from Ireland?

There have been beautiful auroras photographed in Donegal, particularly at Malin Head, the most northerly point of the country. A clear night sky is the ideal condition for observing an aurora as they cannot be seen in daylight. Tracking the sun’s activity gives the best predictions of when auroras are likely to occur.

The Northern Lights as photographed in Ballyliffin, County Donegal

What is a moon halo and what does it look like?

A moon halo is an optical phenomenon during which we see a glowing ring around the moon. It is sometimes called a 22˚  halo because the angle from one edge of the circle to the other as we see it from Earth is 22˚. Moon halos appear quite large in the sky. The radius of the ring we observe is about the same length as an outstretched hand at arm’s length.

What causes this phenomenon?

Moon halos are caused by refraction – the bending of light as it moves from one material to another. Light from the moon passes through ice particles suspended high up in the atmosphere. These ice particles are approximately hexagonal in shape, with apexes of 60˚. As light moves through these particles at this angle, it is deflected twice, resulting in an overall path change of 22˚-50˚. This refraction and deflection occurs in millions of ice particles at once, causing the light to curve into the ring shape we see from Earth.

How can I see a moon halo?

Moon halos can be seen with the naked eye quite often. They are said to be visible up to 100 days per year, making them even more common than rainbows. The ice particles that cause the refraction are associated with cirrus clouds – thin clouds at high altitudes that sometimes signify stormy weather. Therefore, winter time or periods of bad weather are good opportunities to see a moon halo.

Could I see a moon halo during the day?

Theoretically, yes, however it is more common to see a sun halo during daylight hours. A similar phenomenon occurs around the sun when water droplets refract light and a ring is formed. Sun halos tend to be more colourful than moon halos. You’ve probably already seen a sun halo – it’s like a rainbow that is visible all the way around the sun.

A moon halo captured by ESO 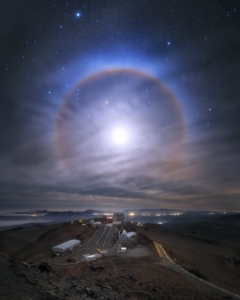 What does the International Space Station look like from Earth?

The International Space Station (ISS) orbits the earth and so can be seen very regularly in Ireland. In a clear night’s sky, it can be seen moving quickly overhead, sometimes from horizon to horizon, as a bright point of white light. It moves similarly to a fast plane but doesn’t blink.

How can I find the International Space Station?

NASA runs a page called ‘Spot the Station’ on which you can find the times and location of ISS sightings in your area. Listed along with the time of the event will be the place in the sky to look, given by a direction and an angle on elevation. To have the best chance at spotting the ISS, turn and face in the direction given, and then look upwards to the angle given by the experts. To interpret the angle correctly, note that straight ahead of you is 0˚ and straight above you is 90˚. As an approximation, without getting too technical, you can use your fist to measure out the angle, as the fist length is about 10˚.  So, if you saw online that the ISS will be visible over Ireland at 11pm SW at 30˚, you would stand outside, preferably in an open space, face a south-westerly direction, hold your fist out at arm’s length, and measure out three fists to find the spot in the sky where you’ll see the space station fly over.

What is the best way to observe the International Space Station?

Telescopes are not recommended for viewing the ISS as it moves too quickly. It is generally only visible for a couple of minutes. A good set of binoculars would be useful to see more detail of the station, however it can be spotted on a clear night with the naked eye as it is the brightest object in the night sky apart from the moon.

Meteors are bits of debris from space that burn up when they enter the Earth’s atmosphere. The brief but bright colour of the burning material creates bright streaks in the sky which are sometimes visible from Earth. Their size can vary a lot. Some meteors are no bigger than a pea while others are the size of boulders.

Comets and asteroids in space are always being eroded. The pieces of debris from this erosion can sometimes make it into the Earth’s atmosphere where they burn up, lighting up the skies. If the Earth passes through an area with lots of comets and asteroids, we will experience a meteor shower, when many meteors are visible from Earth at once.

When and how should I look for meteors?

We can forecast meteor showers and predict when they will be most visible. There is an annual meteor shower in the Northern Hemisphere called Eta Aquarids that is visible from Ireland, given the right weather conditions. The best time to observe meteor showers such as this one is from midnight to dawn. Meteors are often most radiant before dawn. Telescopes and binoculars are not very useful for observing meteor showers as they narrow your field of view. To have the best chance at spotting one, you need to maintain a wide field of view, and if you do see one, trace where it appeared to come from, as you may see more appearing to ‘rain’ from the same area.

Could a meteor land in Ireland?

Meteorites, or meteors that reach the Earth, have been found in Ireland before, but only on two known occasions. If you’re searching for meteorites, look out for dark coloured rocks that are smooth on the outside. The impact probably will not have left a crater unless a meteorite fell on particularly soft land.

Meteors in the Irish sky from Astronomy Ireland 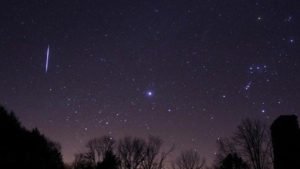 Quark Stars: Are They Real?