It is estimated that around 80% of the mass in our universe is dark matter. Despite making up so much of the cosmos, it cannot be directly observed, and scientists have still yet to find solid evidence of it being detected. Dark matter emits no energy, and no light. This all begs the question, why do scientists believe it makes up the majority of the universe?

Physicists have long hypothesised that there’s more matter out there in space than meets the eye. The origin of the concept of dark matter can be traced back as early as the late 1800s, when Lord Kelvin estimated the mass of our galaxy to be different to the mass of the visible stars: “perhaps a great majority of them, may be dark bodies”. In 1906, Henri Poincaré coined the term ‘matière obscure’ or ‘dark matter’ when speaking of Kelvin’s work, However, it was American astronomer Fritza Zwicky who gave us the first solid prediction of the existence of dark matter. In 1933, his observations of a cluster of galaxies showed that only 1% of the mass needed to keep the galaxies from escaping the cluster was present. There appeared to be 400 times more mass than could be observed, leading Zwicky to infer that unseen matter was the reason for the gravitational pull and extra mass. Over 100 years on from Kelvin’s postulation, and scientific support for the existence of dark matter continues to grow; but the direct data needed to prove it still eludes us. 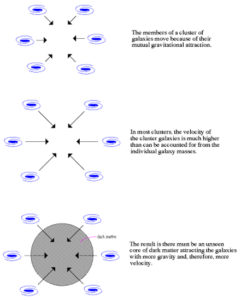 The above figures show the role of dark matter in galaxy clusters (princeton.edu)

The fabric of the universe that we know and can observe is made of three principal particles: protons, neutrons, and electrons – and is known as ‘baryonic’ matter. Dark matter could be made up of this matter or ‘non-baryonic’ matter. In order for the contents of the universe to stay held together, we need 80% of it to be made of dark matter. The only issue is that this matter could be much more difficult to detect if it is baryonic. In the search for dark matter there are a number of candidates; ranging from neutron stars to dwarf stars (white and dim brown ones), or even black holes (Kashlinksky, 2016). There is a problem though, as these stealthy objects would need to have a bigger role than they have been observed to, in order to make up the missing mass.

There is some consensus that dark matter is indeed made of non-baryonic matter. One of the most leading candidates is known as ‘weakly interacting massive particles’ or WIMPS (Bernabei & al, 1997). Compared to a proton, they have 10 to 100 times the mass. Their weak interactions with regular matter harder to detect which of course is an issue. Ahead of WIMPS as a leading candidate are ‘neutralinos’. These are theoretical particles, which (compared to neutrinos) are slower and heavier. The sun beams neutrinos towards, with very rare interactions with regular matter. A suggested type of neutrino known as ‘sterile’ is thought to be a candidate for dark matter; interacting with normal matter via gravity. The Gran Sasso National Laboratory, LNGS, in Italy have previously stated the following in relation to the search for dark matter: “Several astronomical measurements have corroborated the existence of dark matter, leading to a world-wide effort to observe directly dark matter particle interactions with ordinary matter in extremely sensitive detectors, which would confirm its existence and shed light on its properties. However, these interactions are so feeble that they have escaped direct detection up to this point, forcing scientists to build detectors that are more and more sensitive.” 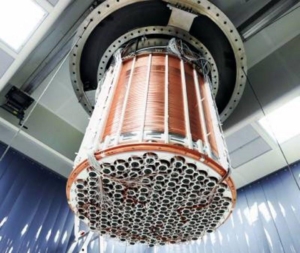 The XENON1T detector at LNGS in Italy (XENON1T COLLABORATION)

So, a question remains still; how do scientists actually know dark matter exists? Well, the answer very much lays in how we find the mass of large objects. We look at their motion. Flashback to the 1970s, as scientists were studying spiral galaxies – assuming they would observe the centre move faster than the outer parts. So there was some surprise when they found that stars had the same velocity regardless of position relative in the galaxy. This showed that there was more mass than could be seen. As previously touched on, looking at clusters of galaxies, they would simply spring apart if they just had the mass that is visible to us. An important note on this issue was added when Einstein was able to show that extremely large objects bend light, meaning they can be used as gravitational lens. Astronomers looking into how light behaves around galaxy clusters had meant we can create a map of dark matter, which is crucial in showing that the majority of matter cannot
be seen. 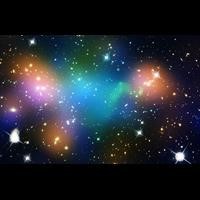 Research in the area of dark matter is thriving, with several different experiments aiming to directly detect it. Many of these experiments have very interesting setups. One such experiment is taking in Italy under a mountain. The Gran Sasso National Laboratory is part of this search, with their ‘XENON1T’, looking at interactions after collisions between xenon atoms and WIMPs.  This is not the only massive detector with low background. The LUX (Large Underground Xenon) experiment in North America is another example. Sat in a gold mind, it searches similarly to XENON1T using xenon and WIMPs. There has yet to be the significant breakthrough needed to confirm direct detection of dark matter. Another underground experiment can be found under the ice of Antarctica. The IceCube Observatory is on the hunt for the aforementioned sterile neutrinos. 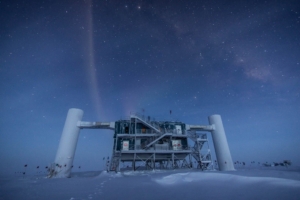 Above ground part of the IceCube experiment facility, the underground is situated 1.6 km under the ice (IceCube Neutrino Observatory)

Despite no breakthrough yet, there has been significant progress and we are truly close. The Fermi Gamma-ray Space Telescope has drawn out maps of the centre of our galaxy and shown a huge excess of emissions (gamma-ray) coming from this area. This could be interpreted as coming from the annihilations of dark matter particles, however more data is still needed from other experiments in order to confirm this possible explanation. Dan Hooper (lead author, physicist at Fermilab) says the “signal cannot be explained by current proposed alternatives and is in close agreement with predictions of very simple dark matter models” (Daylan, et al., 2014). It is truly amazing to think how tantalising close we have come in our efforts to understand dark matter, find it, and directly detect its existence; the journey beginning a long time ago, with scientists like Kelvin and Poincaré, continuing still to this day.

The Neutrino: The Key to Understanding the Universe