It is human nature that, whenever we find ourselves staring at the millions of stars in the night sky, we are confronted with some impossible questions about the strange and distant universe. We are a long way from being able to answer these questions, but we do know where to start – with the stars themselves.

Not much is known about why or how the first stars were formed, but we do know that it was an event that changed the structure of the universe.

We know that these first stars, or ‘protostars’, were made up of hydrogen, helium, and lithium, as these were elements created by the Big Bang. The formation of heavier elements such as carbon resulted from hydrogen fusion in their cores. Although many questions remain about these first stars, we have observed more recent stars undergoing the very same evolutionary process.

Stars begin their life as a cloud of space dust collapsing in on itself. The centre of this accumulation of gasses reaches extremely high temperatures, which causes the beginning of hydrogen fusion. This phase of a star’s life is known as the main sequence, which is defined by the time taken for the hydrogen at its core to burn. Our Sun is currently occupying its main sequence phase.

As stars evolve in the main sequence, fueled primarily by the nuclear fusion of hydrogen into helium, the hydrogen in the core is exhausted. Stars with a mass of 50% the mass of the Sun will become small and cool and will then be called red dwarves . They will burn hydrogen until it is all used up. The rest of stars (including our Sun) will then leave the main sequence and other processes will start to take place. Firstly, a second layer of hydrogen will burn. Afterwards, due to a chain of nuclear reactions, the helium in the core will burn too, creating carbon and oxygen in the process. These processes are marked by intense flashes of energy that lead to considerable mass loss.

Once again, the fate of the star will be determined by its mass and its composition. Stars such as our Sun, and those of up to 8 times the mass of the Sun, will become a white dwarf. If their mass is greater than that, the stars will continue to collapse, and more nuclear reactions will create neon, sodium, magnesium and more oxygen. The appearance of iron marks the end of these nuclear reactions. After this, the star will begin to collapse at speeds of up to ¼ the speed of light. They will then explode as what is called a core-collapse supernova. This might leave a neutron star or a black hole behind.

The ‘leftovers’ of this explosion are propelled into the galaxy, where they can combine with hydrogen to create a new generation of stars, which are known as population I stars. These stars have some noted differences to their population II counterparts – iron constitutes a larger fraction of the mass of population I stars, and such stars are also more likely to be surrounded by objects of similar metallicity, e.g. exoplanets. This makes population I stars a highly desirable find for astronomers. [1] 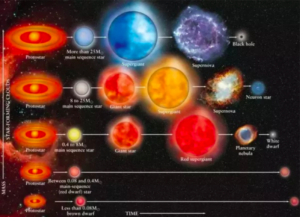 The fate of stars is dependent on their initial masses.

The stellar properties of a star are recorded for a large range of masses. Such records are retained for various reasons, namely to study the fundamental properties of stars, along with their dependence on other factors, and their evolution. Our understanding of stellar evolutions arises from observations noted by examining sophisticated numerical models. These models can solve the equations of stellar structure and nucleosynthesis by computing how the properties of a star change as a function of time.

An application of these models would be to plot the evolution of stars on the Hertzsprung-Russell diagram or the duration of the hydrogen and helium burning phases. The latter clearly highlights the dependence of an object’s fate on its mass. This representation is of note, because despite the fact that carbon, oxygen and heavier elements are also found at a star’s core and undergo fusion too, the time it takes for a star to burn the hydrogen and helium in its core represents a vast majority of its lifetime. Therefore, performing such an analysis allows for a much better understanding of stellar evolutions. 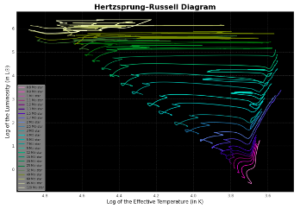 Evolution of stars with masses ranging from 0.8M☉ (Solar mass) to 120M☉ on the Hertzsprung-Russell diagram.

Another application of modelling stellar evolution is determining whether a star hosts a planet that could theoretically sustain life. Three main things are required in order for a star to be able to support life:

The significance of the HZ stems from the fact that liquid water is the hardest criterium of life to fulfil on exoplanets. Its size is dependent on the star’s luminosity, as that is what determines the equilibrium temperature of each of its exoplanets. Hence, by studying stellar mass and luminosity, we are able to easily identify stars that meet these requirements, and hence, may have the ability to sustain life.

There are other factors that must be taken into account when determining whether an exoplanet is suitable to host life. Among those are the fact that some planets that are in their Habitable Zones close to their parent stars can risk getting tidally locked. Stellar flares can also be a problem for low-mass stars, and finally, exposure of the exoplanet to excess UV radiation could create a hazardous environment that cannot sustain life.

It is clear then that studying a star’s chemical composition and in turn, modelling its evolution and its ability to sustain life, can not only deepen our understanding of the Universe, but it can also lead us to feeling more familiar with the very far and seemingly hostile worlds surrounding us.

And perhaps, there might even be someone in one of those worlds, looking at a single bright dot in the sky and wondering if anyone could ever live orbiting a star called “the Sun”.

Comparing and Contrasting the Operation, Efficiency and Application of Various... Applications of Aerodynamics in Motorsport.
Scroll to top