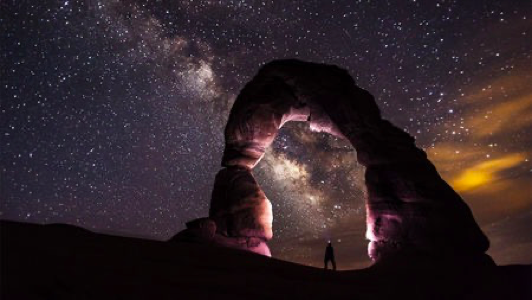 When we talk about Aliens, what generally pops into mind is a short, bald, green man with massively clubbed fingers. I wouldn’t be the first to admit my perception of aliens has been tainted by Hollywood. When I use my (somewhat) scientific brain, I think of single-celled organisms as depicted in Figure 1.The fact of the matter is, however, that my depiction, or Hollywood’s, hold equal merit when we hold it to the standard of what science generally knows aliens to look like and especially when compared to the vastness of space.

Luckily, there have been great minds before us to think about this; among many, Frank Drake and Sara Seager. It was generally agreed upon that there must be life of some sort, apart from our own, in the Universe. This was further solidified when fossils that resembled bacteria were found on Mars as early as 1996. However, back in 1961, Frank Drake decided to tackle the more intimidating question; what the possibility or probability is of contacting another civilisation.

Where N = the number of civilisations with which humans could communicate,

R* = average rate of star formation in our galaxy,

fp = the fraction of stars that have planets orbiting them,

ne = the number of those planets that are capable of supporting life as we know it,

fl = the fraction of exoplanets where life evolves,

fi = the fraction of life that develops intelligence,

fc = the fraction that develops communication through electromagnetic waves,

L = longevity of the civilisation.

The Drake equation is detailed above. Let’s try to understand this. R* is the average rate of star formation per year. This is generally agreed to be about 3 solar masses, or 3 times the mass of the sun. fp is the number of stars that have planets orbiting them. The most recent number is 1.6 planets per star, but previously the probability of a star having a planet has varied between 0.5% and 50%. ne is the probability of those planets supporting life as we know it. These planets are in ‘the goldilocks zone’, an area within a star’s orbit that can support liquid water due to gravitational pressure and temperature. Most recently, it appears the number of stars with one earth-like planet is closer to 50%, which is promising news. The final two conditions give us a hint to the major problems with finding life, the first being communication. The nearest solar system to our own, Alpha Centauri, is 4.3 light-years away, but we are, at a best guess, between 24,000 and 28,000 light-years from the centre of the Milky Way. This means that if a civilisation is trying to contact us, it could take between 5 and 50,000 years for us to only receive the message. To put that in different terms, the strongest radio waves human beings have ever emitted into space are only 200 light-years away. The modern form of humanity has been around for 300,000 years. Since humanity evolved, there has only been a brief amount of time from which we could emit any form of communication, never mind receiving or looking for messages. This emphasises the importance of the longevity of a species which we hope to one day contact. Regardless of the probability of life being out there, Drake’s equation highlights the issue of communication and longevity necessary to prove any of the predictions for the other variables.

Where N = the number of planets with detectable biosignature gases,

N* = the number of stars within the sample,

FQ = the fraction of quiet stars,

FHz = the fraction of stars with rocky planets in the habitable zone,

FO = the fraction of observable systems,

FL = the fraction with life,

Seager’s equation is a variation of the Drake equation but with a more practical approach. Seager attempts to look for life in any form, microbial or civilised.

There are calculated values that can be plugged in for the first 4 variables, but Seager has said that the values inputted for FL and FS are guesses. The basis of the equation is to look for N which is the number of planets with detectable biosignature gases. A value of 30,000 can be calculated for N*, which is the number of stars in the sample. It is determined by the number of stars bright enough to be seen by the James Webb telescope. FQ is the fraction of quiet stars. Active stars are very volatile, changing temperatures by thousands of degrees within minutes, making sustained life close to impossible. Beyond that, the brightness or luminance of the star would also be changing rapidly making looking for exoplanets difficult. This is due to the method of finding exoplanets; using a telescope, the shadows caused by planets are what is looked for, as the planets themselves are too small to be seen. If the luminance is changing, the already faint shadows are hard to distinguish. This value was calculated to be 0.2. FHz; the fraction of stars with rocky planets in the habitable zone was found to be 0.15 and FO; the fraction of observable systems can be determined by basic geometry to be 0.001. FL; the fraction of planets that have life and FS; the fraction of detectable signals of biosignature gases are educated guesses. FL was given a value of 1, which is extremely optimistic. FS is dependent on what is defined as a biosignature gas.

When comparing the two equations, there are three main differences. The first, the largest, is the intent of the equation. The Drake equation was written theorising what it would take to contact an intelligent civilisation. Seager’s equation was written to create scientific steps to have a better understanding of the possibilities of life, whether it be microbial or intelligent. A big indicator of this is to look at where the equations begin their analysis. The Drake equation begins at a level beyond a time or position relative to us, whereas Seager’s equation starts with a variable that is specific to our own time and what we are capable of currently observing; average rate of star formation per year versus the number of stars in the sample as seen by the James Webb telescope, respectively.

This brings us to the final and most intricate difference; the form of wave each equation uses. To most people, who haven’t spent a large portion of their time learning about waves, be that harmonic, vibrational, longitudinal, translational or wave-particles, the matter of waves probably seems insignificant. However, this tells us a lot. How long of a time span or distance, and what magnitude we should prepare for if something was found. Both equations focus on EM or electro-magnetic waves. These waves can travel long distances in a short amount of time. Types of EM waves include, light waves, radio waves and X-rays. They are on a spectrum, as seen in figure 2. We use these waves to communicate, exchange energy and we depend on them for our vision. How each equation uses them is a defining factor. The Drake equation looks for EM waves with a long wavelength, permeating the vacuous space. Drake’s equation looks at what could be found within the radio waves frequency. In the Seager equation, transit spectroscopy is used. This form of spectroscopy is a technique used to infer the atmospheric properties of exoplanets.

Spectroscopy is the study of the absorption and emission of light and other radiation by matter. It involves the splitting of light (or more precisely electromagnetic radiation) into its constituent wavelengths (a spectrum), which is done in much the same way as a prism splits light into a rainbow of colours. The composition of exoplanetary atmospheres may be determined using transit transmission spectroscopy. As an exoplanet orbits its star, it blocks some of the light transmitted by the star. The light must now pass through the atmosphere of the planet. The composition of the planetary atmosphere affects the transmitted light, as different molecules absorb light of different wavelengths, to different extents. Again, this shows how Seager’s equation has the intention to physically measure the number of habitable planets even though we are not quite at that stage yet.

Be a physicist or a philosopher, neither or both, the Drake and Seager equations offer great insight into what possibilities are out there, what we will need to be capable of detecting and contacting life and the probability that we are not alone. Although the equations are very different, they complement each other nicely. The Drake equation asks what it would take to contact a different life of our own and the Seager equation tells us what is necessary in that first step on a more scientific level.