Since their direct observation by LIGO in 2015, gravitational waves have been causing ripples in the scientific community and beyond, with their proven existence making headlines across the world as a testament to centuries of hard work and a shining example of how advanced technology has become to allow us to observe what was long considered un-observable. Despite all this, however, one thing that is immediately apparent is that most articles and discussions about their discovery seem to focus on the efforts of one man alone. One would be hard-pressed to find an article that doesn’t speak about gravitational waves as though it were Einstein and his theory of General Relativity that were the original and driving force behind the quest to observe this phenomenon – when, in fact, not only were gravitational waves theorised by a number of great minds far before Einstein had even published his theory, but he vocally opposed their possible existence throughout much of his career.

Gravitational waves were first theorised by self-taught electrical engineer Oliver Heaviside in 1893. Heaviside is best known for his development of vector calculus, which allowed him to express Maxwell’s electromagnetic equations in the simple vector format still used today. Using and manipulating Maxwell’s equations, he made an analogy between electromagnetic waves propagating through a vacuum and similar waves that could be generated by a particularly large gravitational force.[1] This idea was broached again in 1905 by French mathematician, physicist and philosopher Henri Poincaré – this time from the angle of relativity. In his paper ‘On the dynamics of the electron’ he theorised that gravity should propagate in waves similar to an electromagnetic wave produced by an accelerating electrical charge. By solving the Lorentz transformation for gravitational force, he, like Heaviside before him, came up with an expression for gravitational field analogous to electromagnetic field, travelling at the speed of light. [2]Poincaré was the one to coin the term ‘gravitational wave’ in the first place, a full decade before the concept was brought to Einstein’s attention.

Then along came Einstein with his 1915 theory of general relativity in which he discussed the possibility of gravitational waves. He concluded, however, that due to the fact that mass could not be negative, gravitational dipoles could not exist the same as electromagnetic dipoles do, and so gravitational waves were not a possibility. In a letter to fellow German physicist Karl Schwarzchild, he said that ‘there are no gravitational waves analogous to light waves.‘[3] Remaining sceptical about this statement, he made efforts to manipulate his general relativity equations to match the propagation expression found in Maxwell’s equations, eventually finding a solution which included three distinct types of gravitational wave propagating at the speed of light. This solution was not looked upon fondly by the community, with critics such as Arthur Eddington proving in 1922 that two out of the three wave types could actually move at any speed, not necessarily the speed of light as required for gravitational wave propagation.[4]

After this, Einstein returned to his original conclusion that the existence of gravitational waves is impossible. Writing to physicist Max Born in 1936 he stated that ‘gravitational waves do not exist, though they have been assumed a certainty to the first approximation.'[5] That same year he submitted an article for review titled ‘Are there any gravitational waves?‘, presumably expressing the same sentiments as in his letter to Born. When the article was met with scepticism and negative comments from the reviewer, who had spotted an error, Einstein became stubborn and indignant, writing to the editor that he ‘see[s] no reason to address the – in any case erroneous – comments of [the editor’s] anonymous expert.'[6] The article was withdrawn and never published. Einstein, however, was aware of the error made in the article, and finally conceded at a talk in Princeton University on the ‘Non-existence of gravitational waves’, that ‘If you ask me whether there are gravitational waves or not, I must answer that I don’t know. But it is a highly interesting problem.’ He modified the previously unpublished article to reflect his newfound doubt as to whether or not gravitational waves could exist and published it in a different journal, thanking the reviewer who he had originally scorned for pointing out the mistake for ‘their friendly help in clarifying the original error.‘[7]

By the end of his life Einstein had finally become convinced of the existence of gravitational waves, but not before decades of denial and stubborn insistence of their non-existence. Whether or not they existed was also dwarfed by his belief that even if they existed, they would be so faint that they would surely be undetectable by any equipment that could be built on Earth. Furthermore, even if they were detectable, Einstein doubted that they would ever be of use scientifically. In the years after his death, further modifications to the theory of general relativity were made by the likes of Felix Perani, who published a paper in 1956 demonstrating how gravitational waves could be observed and deduced by measuring the movement of particles back and forth as they pass by.[8] Peter Bergman furthered the description of this effect, explaining how the gravitational waves would distort a ring of particles as they passed by. [9] These developments sewed a faint hope that the detection of such waves could in fact be possible, and the following decades saw a huge effort in building equipment suitable to measure this predicted distortion. 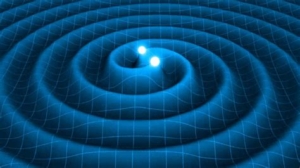 Artist’s rendition of the gravitational waves produced by the merger of two massive bodies such as the black holes observed by LIGO in 2015.

After numerous failed attempts at detection and a full century after the theory of general relativity was first published, the ‘Laser Interferometer Gravitational Wave Observatory’ (LIGO) momentously detected gravitational waves produced in the final milliseconds of a merger between two black holes of 29 and 35 solar masses, 1.3 billion light years away. [10] The event lasted 0.2s as the gravitational wave altered the path length of the 4km-long interferometer arms  by about a thousandth of the width of a proton. The total energy of the gravitational waves produced in this time was equivalent to 3 solar masses, and the peak emission rate in the final few milliseconds of 3.6 x 10⁴⁹ Watts, surpassed 50 times the combined power of all the radiated light from all stars in the observable universe. [11] The importance of this observation cannot be understated. As well as having huge implications in the astrophysical realm, it is also a fantastic example of human achievement as a whole. The sheer magnitude of the LIGO project, the absolute precision of the equipment and the groundbreaking results proving that humankind had detected the undetectable, demonstrates just how far technology and physics have come in the last century and bodes well for the possibility of observing other elusive phenomena in the coming years. It proves that with hard work, perseverance, and an open mind, the bounds on what is possible may be stretched indefinitely.

So why, then, is Einstein receiving so much of the credit and congratulations for their discovery, when he was neither the first to theorise their existence nor a very positive proponent for their case? Why is it that his name far overshadows the names of those who came before him, and those who came after who modified his theory to show their possible existence after he had vehemently denied it for so many years? Why is his notorious stubbornness and unwillingness to change his theories celebrated, and the observation of gravitational waves lauded as the final piece in the puzzle of general relativity, thus proving Einstein right? If anything, their observation proved him wrong: not only were these minuscule waves detectable thanks to modern technology, but their implications are incredibly far-reaching and useful across several disciplines in physics. The struggle which eventually led to their observation proved that the ability to adapt and reassess is not only admirable but necessary to advance in both experimental and theoretical physics.

Above all else, the astounding observation of gravitational waves proves that there is no place in modern physics for egos like Einstein’s. His unwillingness to admit to his mistakes may have set the search for gravitational waves back decades. While it is undeniable that his theory of general relativity popularised gravitational waves and sparked widespread debate over their existence, his self-destructive pride and obstinacy did little to actually help the cause for detecting them at all. This case is one of many in which the egos accompanying brilliant minds unfortunately come to interfere with their quest for knowledge, something which hopefully can be moved past now and in the future for the betterment of scientific theories and method across the board. Despite being considered one of its founders, Einstein’s ego caused him to outright reject quantum theory too, as he simply did not want to believe that the laws of the universe could be anything but deterministic. With the possibility of LIGO eventually being able to detect cosmic strings proposed by String Theory, which seeks to unite general relativity and quantum theory, perhaps it is not unreasonable to look toward a coming era of physics in which, despite his stubbornness, and like Newton before him, Einstein and his theories will be rendered irrelevant in the advancement of physics.

Dark Matter: What Is It and Where Is It?

Physical models and electrical analysis of the Brain
Scroll to top