The human desire to explore the unknown has driven the development of telescope technology to unforeseen levels. Although, we may be on the verge of pushing telescope standards to new heights.

Telescopes have been improving ever since 1608, when the first telescope design patent was submitted. This patent was for a refracting telescope, which was able to obtain a magnification of up to 3 times. This design was quickly improved by astronomers such as Galileo, and the magnification improved to 20 times in less than a year. In the 400-year journey of design development, telescopes have developed to be sent into space (Ex. Hubble), orbiting our planet, for better images and to avoid atmospheric attenuation. Modern telescopes and all proposed next-gen telescopes use segmented mirrors as the primary objective, which is multiple smaller curved mirrors placed together to act as a larger mirror. They can focus on specific wavelengths, and can have a light-gathering mirror larger than 20 meters in diameter. 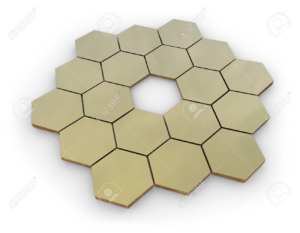 As the telescope designs improved and became more effective since the 17th century, important astrophysical discoveries about our universe were revealed, and the ‘age of astronomy’ began. The discoveries, such as the Moons of Jupiter by Galileo continued to drive the development of astronomy and the telescopes used, and the rate of telescope improvement increased.

Modern and future proposed ELTs (Extremely Large Telescopes) such as the ‘Thirty Metre Telescope’ under construction seem very impressive, although the idea of the terrascope could make ELTs look very small. Imagine a telescope with a lens the size of a planet. This concept could lead to a terrascope that, at only one metre across, could collect as much light as a 150-meter mirror. 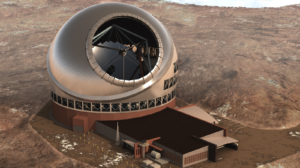 Telescopes today are designed to provide higher and higher magnification of celestial objects. But this comes at a steep price. The magnification provided by a telescope is related to its focal length. I.e. The bigger the telescope the greater the magnification. But large telescopes require a high cost and a lot of work to build. But what if we could use nature to provide long focal lengths that could lead to unimaginable magnification, at a cheaper price? This is where the ideas of Albert Einstein come into play.

In 1916, Einstein published his theory of general relativity which described how a massive object causes a distortion in the gravitational field around it. Evidence of this theory lies partially in the phenomenon known as gravitational lensing. Gravitational lensing is the process by which light rays are “bent” or distorted as they travel around a large mass, where the mass acts as a “lens” to bring the light rays to a focus. This was first observed in 1979 when two identical quasars were detected a short distance from one another. It was later discovered that it was in fact a single quasar imaged twice by a galaxy cluster acting as a gravitational lens. This was aptly named the “Twin Quasar”. This effect was first predicted by Einstein in 1936, upon completion of his Theory of General Relativity. Thus far, the ideas of gravitational lensing have been used to analyse the distribution of matter in galaxies and galaxy clusters as well as estimating the mass of such lensing objects using instruments here on Earth. But what if we could get closer to the action?

An illustration of gravitational lensing by a galaxy cluster. Credit: Leon Koopmans

In the 1990s, Dr Claudio Maccone proposed applying the concept of gravitational lensing in spaceflight. In particular, he suggested using the Sun as a huge gravitational lens to magnify and converge light rays from a distant source onto a detector in space. This mission was dubbed the name FOCAL (Fast Outgoing Cyclopean Astronomical Lens) and would provide insurmountable magnification of celestial bodies. Using Einstein’s theory of general relativity, he found that light rays from a celestial object bending around the Sun’s surface could be detected at a minimum distance of 550 AU (Earth-Sun distance) from the Sun. Maccone outlined his mission to NASA and ESA in 1999; yet at the time, neither organisation were convinced that such a feat could be achieved and the project was left untouched. In particular an issue is the distance at which such a detector must be placed in order to detect these light rays. Recently however, the idea has resurfaced, this time using the Earth as such a gravitational lens. This was proposed by Professor David Kipping from Columbia University, aptly named the Terrascope.

The Terrascope is the concept of using a planet as an atmospheric lens in astronomy. Light from distant stars or objects refract through the Earth’s atmosphere towards a detector on the other side of the planet. If a lens the size of a planet could be used in a telescope, the magnification would make the most sophisticated current telescopes look unimpressive. We could potentially learn so much about our universe, including the chemical composition of exo-planets atmospheres, and the evidence of intelligent life. The future of astronomy is in Terrascopes.

Artwork showing how light would refract through the atmosphere.

So what makes the Terrascope different from these other ideas of natural astronomy, where light is bent by natural phenomena? The answer lies in what is doing the bending. Where light in projects such as FOCAL is bent due to the warping of space around a massive object, light incident on a Terrascope is refracted through the Earth’s atmosphere.

Why does it refract? Because the effective speed of light changes as it travels between media, and the Earth’s atmosphere can be thought of as layers of differing refractive indexes. Each time light travels from one medium to another, it bends, just like how your drinking straw appears bent when it rests in a liquid.

So, picture this: light from a distant star strikes our atmosphere, bending about half a degree. This light continues until it leaves the other end of our atmosphere, bending an additional half a degree. Now imagine light from the same star striking the opposite side of the Earth’s atmosphere. It goes through the same bending process. The two rays will eventually meet and form a focus, a point where the intersection could form an image.

Light from a distant star is refracted on its way into the atmosphere, and again on its way out the other side, creating a focal line. Credit: Kipping

As with all things in science, there are certain limitations to the Terrascope. For example, there is a limit on how close the beam can be to the earth. If the beam is too close it will collide with the earth’s surface and will not be refracted by the atmosphere to a focal point. Also, while the atmosphere plays a key role in bending the light beams, the atmosphere could also cause scattering or extinction of the light beams which would prevent the beams from reaching the detection point. Similarly, clouds could block the light rays and stop them in their path, so to prevent this the light beams would need to travel above the clouds. In this case, with the beams travelling at a higher altitude the atmosphere would be thinner which would lead to less refraction (bending) of the light which would cause the focus point to be further away. 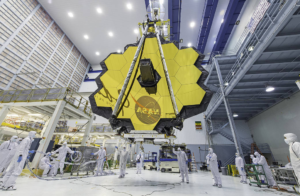 James Webb Space Telescope which has cost in excess of 9 billion US dollars to date. Credit: Nasa Webb telescope.

While a Terrascope would no doubt provide an immense amount of data for research, there are still many variables that would have to be considered before such a system could be set up. For example, there is currently very little known about the effects that atmospheric turbulence would have on the effectiveness of the Terrascope. Further investigation of such factors could lead to the next big step in space observation and exploration for the human race.