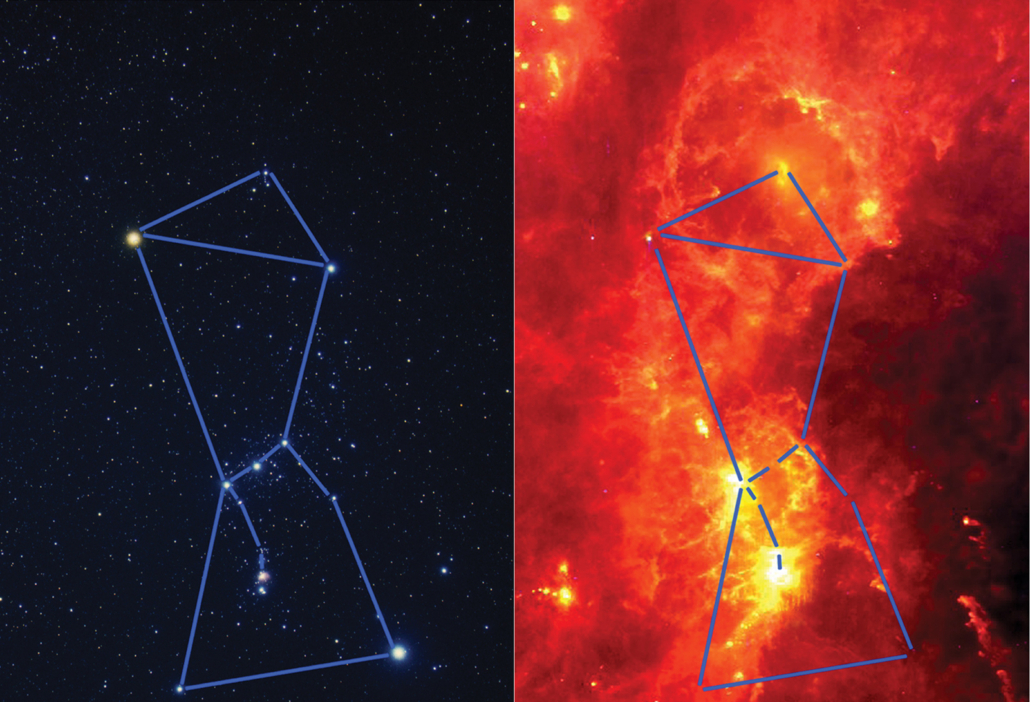 Infrared imaging and spectroscopy have become one of the most fascinating areas of modern research in physics, with applications ranging from the study of plant tissue structures all the way to investigating the structures of galaxies. Indeed, despite not being as flashy as the String Theories or General Relativities of the world, the science behind IR imaging has become a somewhat pivotal part of modern technology and provides a key insight into the fabrics that make up our universe.

So, what is IR imaging? IR, or infrared, refers to a specific wavelength band of the electromagnetic spectrum, with IR waves being slightly longer than visible light and shorter than radio waves. 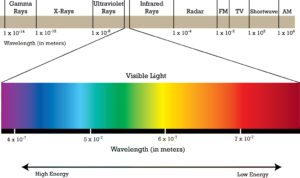 The important feature to note is that all objects will emit some form of IR radiation. Thus the main benefit of studying IR spectra is that it allows one to study an object whose visible light spectrum either doesn’t exist or is blocked, and to determine properties and features of its inner workings

Perhaps the most well known and what can be considered the most useful application of IR imaging with regards to general society is its use in medicine. Infrared thermography has been present within the medical landscape for decades, beginning in 1928 when Professor Czerny in Frankfurt presented the first IR image of a human body. This was the first time that technology could be used to accurately describe the temperature/radiation produced by nearly any part of the human body, all without even making contact with or interfering with the measured skin.

Of course, with all discoveries made in history, there were, and still are some drawbacks. In the beginning these were associated with poor thermal and geometrical resolution, the original prototypes not offering the highest in quality or perhaps even usability, as the stability and exact measurements were often questionable. The biggest downside, however, was its reproducibility. It was often too expensive to build even the most basic infrared cameras. This was due to many reasons: the unavailability of the required natural resources as well as the heavy machinery required in the construction, the manpower required to operate and build such machinery as well as the believe that with x-rays being as successful as they were in the medical field, the use of IR imaging would not be required.

Most of these obstacles were overcome eventually, through funding from large corporations as well as the invention of better and more cost-effective cameras. Despite the setbacks experienced, the end products have been able to pave the way for a new era of disease detection. IR images are used to show abnormally increased focal surface temperature on specific parts of the human body, which are related to radiation produced by cancers, tumours, etc. There have also been uses in rheumatology and orthopaedics, neurology as well as vascular imaging. 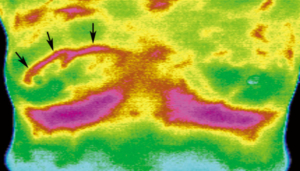 In more recent news, scientists from the Institute of Image Communication and Information Processing, Shanghai Jiao Tong University have even developed a way to efficiently detect respiratory infections such as Covid-19. This is done by performing health screenings through the combination of RGB and thermal videos obtained from a FLIR (Forward Looking IR) camera and an android phone. The data used in the experiments were collected from Ruijin Hospital as well as from themselves and produced results with 83.7% accuracy compared to real world datasets. Of course, in this day and age, this accuracy would be considered quite low, but through more research and testing, this could be a means to quick and precise testing that can be carried out in schools, work and hospitals.

The use of IR imaging has not been limited to use on Earth; it has managed to make its way to our satellites and probes travelling into the farthest reaches of space. Infrared astronomy is an area of active research that is hugely beneficial in the understanding of galaxies, stars, planets and other astronomical structures. It involves both the imaging of structures in space based on their infrared radiation and the spectroscopic analysis of electromagnetic radiation in the infrared range that either comes from or passes through astronomical structures., which gives information about the composition of astronomical objects. 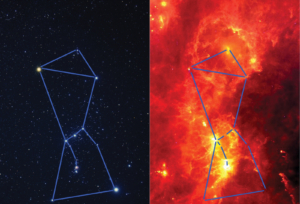 FIG.3. Two pictures of the Orion constellation, the left being an image in the visible spectrum and the right in the infrared spectrum. This shows the power of making observations outside the visible spectrum, allowing us to observe much more detail [3]

Light from stars and galaxies have a continuous spectrum associated with it, whose intensity peaks at a certain wavelength. When this light passes through matter, however, depending on the type of molecules present, certain wavelengths are absorbed. By analysing the light spectrum around an exoplanet as it transits a star, we can determine the composition of its atmosphere, which is hugely important in determining if an exoplanet could harbour life. 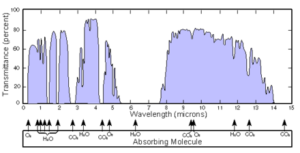 FIG.4. The infrared windows of our atmosphere

One area one might not expect to see IR imaging methods and more specifically spectroscopy is in the agricultural and food industries, but in fact it has been in use for decades.

Today the powerful compositional analysis provided by various spectroscopic methods is invaluable in the production of food and other agricultural goods. Traditional methods of determining the quality of produce are often time consuming, destructive and have a negative impact on the environment due to the use of harmful reagents and intensive water costs.

Spectroscopy, specifically in the Near-IR and Mid-IR regions are employed in all areas of the agricultural industry, from soil analysis, (one interesting example close to home being Johnstown Castle), to post-harvest produce quality control. Quality control is a theme when it comes to NIR spectroscopy; an example of which is its use in the grain industry where it is used extensively in the study of the characteristics of flours and grains. Using this technology flour mills can quickly determine the nutritional value and moisture content of wheat and flour, allowing them to ensure it is up to standard. Another example is ensuring that the crisps in your cupboard stay crisp and are uniformly flavoured. Seabrook Crisps in Bradford, UK, have employed the use of an NIR spectrometer to ensure their flavour machine is running optimally by performing tests throughout the work shift and between flavour changeovers. By testing the spectra of crushed crisps the machine determines the percentage of flavouring present, if this flavour concentration was not within specification the flavour application machine is recalibrated to deliver the optimal, even coated crisp.

MIR and specifically Fourier Transform Infrared (FTIR) spectroscopy is an important method in managing the quality and safety standards of fat and oils used in the preparation and production of food. A large problem when storing and processing fats and oils is deterioration due to oxidation when in contact with atmospheric oxygen. This reaction produces hydroperoxides which can further break down into many secondary oxidation products, giving rise to an off-taste and bad odours. Therefore the oxidative stability of an oil is an important factor when considering the quality and stability of oil and FTIR spectroscopy provides an effective means to test the oxidative state of an oil.  This is done by measuring the chemical concentration profiles of important oxidation products such as hydroperoxides using FTIR spectroscopy.

Where to next for IR imaging?

Of course, as is the case with most modern technologies, the use of AI and machine learning algorithms in IR imaging has led to many interesting advancements in the field. For many, the thought of AI technology slowly creeping into more of our lives isn’t the most comforting thought. It cannot be denied however that these new technologies possess a vast well of potential when it comes to advancing our current systems, with a few notable possible applications to the world of IR imaging.

Machine learning is a way of creating artificial intelligence, by programming a computer to make a decision, and telling it when the decision was correct. By repeating this process, the computer gets better answers each time, and you eventually create an algorithm that can accurately make the right decision. This can be applied to many different areas of technology, including thermal imaging technology.

One example of this is how IR Imaging can be used as a basis for developing an intelligent microwave oven, which uses machine learning to accurately determine what food is placed inside and to what temperature it should be heated, and then uses thermal imaging to measure the temperature so that it is cooked for the right length of time. Over time the microwave becomes more intelligent, by learning the types of food consumed by each member of the household and how long they usually cook it for.

Looking further afield, IR sensors can be integrated into drones and together with deep learning algorithms can be used to identify ground-nests of birds on agricultural land before being damaged by machinery. 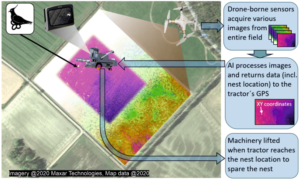 The thermal imaging cameras on the drones take pictures of the field, which are then analysed by artificial intelligence to determine where the birds’ nests are. The farmer is then alerted to where the nests are so they can be protected.

To sum up, it’s clear that the areas of IR imaging and spectroscopy have a wide variety of applications to modern science and certainly possess a lot of potential for further development into the future.