For a long time holograms have captured the imagination of people and appear in many of our favourite works of science fiction, be it the hologram of Princess Leia in the first Star Wars film or the holographic advertising in Back to the future 2.

While we may not be at the the level of science fiction yet it is true that we are able to create holograms in the present day. Invented in 1948 by Dennis Gabor later earning him the Nobel Prize in physics, holography has many uses ranging from data storage to fraud prevention.

Recent research from the University of Glasgow has now shown us a new quantum technique for holography which overcomes certain obstacles imposed by classical physics. This development will greatly advance the applications of holography.

A laser beam is split into two separate beams one of which illuminates the object we want to recreate as a hologram. This is known as the object beam. The second is known as the reference beam this will travel a different path to the object beam but they will eventually recombine on the holographic plate. Because a laser is a coherent light source the two beams will have the same frequency and were initially identical however this object beam will now have a slightly different phase because of its interaction with the image object, so that when the two beams recombine their interference pattern created will be that of the object we want to recreate as a hologram. 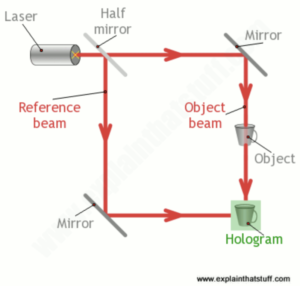 We have established that we need optical coherence for a hologram to be created. This is because we need to light to be coherent to interfere. But light made of entangled photons can interfere without being coherent. This phenomenon of entanglement means that two entangled photons are connected even if they are separated by a great distance, any interaction experience by one photon of the pair will be experience by its entangled twin. This is the principle underlying the University of Glasgow experiment. One photon will have the image phase information encoded on it and the other will also experience this despite them never overlapping like in the classical case. Separate cameras detect the photons and phase correlation measurements are taken to reconstruct the image. This is astounding as it means an object could effectively be imaged by a photon and then the image reconstructed by its entangled photon twin at any other point on the planet. 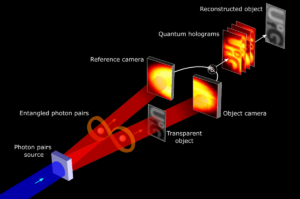 fig2. How the quantum hologram is created in the University of Glasgow experiment.

This breakthrough will no doubt lead to significant advances in all applications that utilise holography such as quantum information and medical imaging.

Anomalies in the muon g-factor could be evidence of new undiscovered particles...
Scroll to top