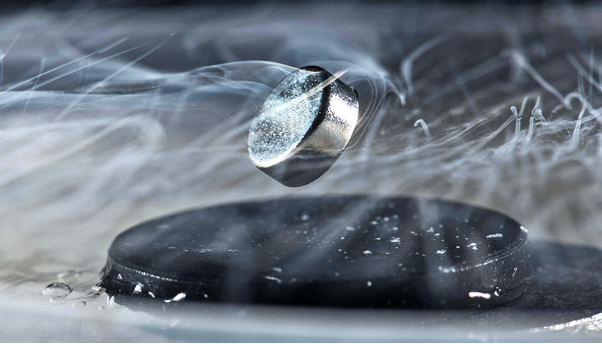 What even is a Conductor?

A conductor is any material which allows an electric charge carrier (e.g. an electron) to flow through it once a voltage is applied to it. This flow of a charge is known as electric current. Commonly known conductors are metals such as gold, silver, iron and copper, and even sea water! 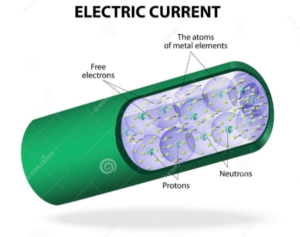 What makes it so ‘Super’?

Super conductivity is a phenomenon which occurs in certain materials when their electrical resistance drops to zero and they begin to eject magnetic flux fields after reaching their critical temperature. This can be seen in certain materials, i.e. superconductors.

For anyone unfamiliar with these terms, electrical resistance is the force that opposes the flow of electric current through a material. One way electrical resistance occurs is when a metal heats up and the atoms start vibrating a lot, this results in the nucleus getting in the path of the electron that’s trying to move past it and ultimately hindering its flow. The aim for most conductors is to have as little resistance as possible for maximum efficiency. The ejection of the magnetic field lines is a bit more abstract. In the diagram below, on the left hand side is a superconductor above its critical temperature, and on the left is after it has fallen below it and has its superconductor properties: 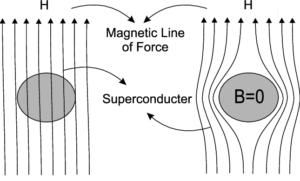 Firstly, there is a common misconception about superconductors, that is that they can be accurately described through a classical description using the likes of Lenz’s law for a conductor with no resistance, but this is not the case. Superconductivity is what is known as a ‘quantum mechanical’ property, which basically means that it’s just a few million times more difficult to understand.

They were first observed by  Heike Kamerlingh Onnes, a Dutch physicist in 1911, but it took another fifty years before much headway was made in describing the phenomenon.

The first big breakthrough in understanding them wasn’t until 1950, which was the Ginzburg-Landau Theory. This theory was developed from Landau’s previous theory on second order phase transitions, where superconductivity is seen as a state of matter of a material. The crux of this theory is that there exists a theoretical parameter which can be described using what’s called a ‘wave-function’. The main property of this parameter is that it is zero for any temperature above the critical temperature, but it has a positive value when the temperature decreases below it, this would explain the sudden appearance of superconductivity as opposed to it gradually becoming visible. The next breakthrough would be the biggest one yet, and would also be the best description for most superconductors to this day.

The Barden-Cooper-Scheifer (BSC) Theory was conjured up by the three physicists it is named after in 1957, and it was the first solid microscopic theory of superconductivity developed, which also won the Nobel Prize. The premise of this theory lies within another phenomenon called Bose-Einstein Condensate (BEC).

Before getting straight into superconductors, it is important to first outline the key differences between two types of particles: Bosons and Fermions. Fermions are ‘distinguishable’, which means they can only have one copy of themselves per energy level, i.e. two electrons in each orbital (one spin up and one spin down). Bosons on the other hand are what’s known as ‘indistinguishable’ can occupy any energy level with as many Bosons as possible. As a result of this at very low temperatures Bosonic materials will clump together in the lowest energy level, this leads to the aforementioned BEC. This is a state in which bosons form a kind of condensation which is quite different to your standard solids, liquids and gases but still considered a state of matter.

Now, you may be asking “Ok, so Bosons can do all that fancy shmancy stuff, but aren’t we looking at electrons, which are Fermions?”, and you would be absolutely right! But the effect of having the conductors at such low temperatures lowers the heat energy in the system such that the positively charged nuclei of the metal (blue circles below) won’t be vibrating on their own at all, so they’re much less likely to get in the electron’s way. This also means that as an electron passes through it will slightly pull the nuclei towards it as they have opposing charges, this will then bring the nuclei closer together, but also closer to the next electron in line. This ends up in a slipstream like effect, similar to how it is with cars on the motorway, where neighbouring electrons flow as a pair, this is called a Cooper Pair. 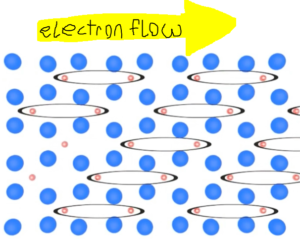 “So what’s so important about this Cooper Pair nonsense?”, I can already hear you ask. Well, it turns out that when the critical temperature is reached and the Cooper Pairs are formed, they actually act as a Boson! This allows them to clump together in the ground state energy level and form a condensate. The main reason this is important is that, as all the Cooper Pairs are bonded over a relatively large distance, all the new ‘Bosons’ become entangled and move together as a whole. This reduces the chance of any electron colliding with any nucleus, (even if one did collide with a nucleus, the second electron in the pair will reconnect with the nearest free one and thus the entangled body will be almost instantaneously remade), and hence removes any resistance in the flow of the electrons! And thus, we arrive at the fundamentals of the BSC Theory of superconductors.

A Type II superconductor is one that can be described as having two critical temperatures Tc1 and Tc2, when the conductor’s temperature is in these limits it will act as a mixture of a normal conductor and a superconductor. Within this band the magnetic flux lines partially penetrate the conductor, with them being expelled completely beneath the lower limit of the band, and them passing through as if it were a normal conductor above the upper band limit.

What is the Importance of Superconductors Today?

First and foremost the main reason why superconductors are an area of such high intrigue is to do with the benefits of zero electrical resistance. Energy companies have to transport their product over great distances, and they inevitably lose money on electrical energy lost due to resistance with every joule they try to transmit, with estimates of around 7.5% of energy being lost as a result of resistance, according to sta.ie.

Secondly, superconductors act as a mechanism for representing quantum phenomena at a macroscopic level, making them an area of utmost importance in research in both experimental and theoretical physics.

At the end of the day, I would have to say there is something quite super about these conductors after all.

What if Gravity Disappeared?
AURORA BOREALIS – A PHYSICAL PERSPECTIVE
The Particle Zoo: Building blocks to our Universe.
Interstellar v. High Life: Black Holes on Film
John Bell and the Death of Classical Determinism
How to die from an electric shock
0 replies