The northern lights, also known as aurora borealis, are stunning luminous phenomena visible in the north pole region of the planet. In the south pole, they are called southern lights or aurora australis. The colorful dance of these lights in the night sky has fascinated humans for millennia. If once thought of as spiritual entities, today, the physics behind these magical events can be explained. 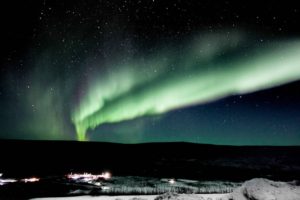 The name aurora borealis was coined by the Italian astronomer Galileo Galilei in 1916 after Aurora, the Roman goddess of dawn, and Boreas, the Greek god of the north wind. The earliest reliable account of the aurora borealis comes from Babylon, in an astronomical notebook dated 567 B.C. The babylonian recorded to have seen a “red glow” on the night of 12/13 March. This observation, which is part of a series of astronomical events, occurred when the geomagnetic latitude of Babylon was about 41°N compared with the present value of 27.5°N, giving reasons to believe in a higher auroral occurence in 567 BC than at present on the territory. In the 20th century, the Norwegian scientist Kristian Birkeland theorized a scientific explanation for this phenomenon. The display of coloured lights is a consequence of the interaction of the solar wind with the Earth’s magnetic field and atmosphere.

The Earth is considered to be approximately a magnetic dipole, with a magnetic South pole (geographic North pole) and a magnetic North pole (geographic South pole) [Fig. 2 ]. The Earth’s magnetic field forms an envelope around our planet, the magnetosphere, and its strength varies roughly between 25,000 – 65,0 nT (0.25 – 0.65 Gauss) depending on its direction and distance from the Earth’s surface. The magnetosphere protects the planet from high-energy particles coming from solar winds. 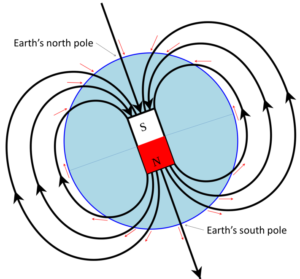 The solar wind is produced from plasma material escaping from the Sun’s corona (outermost atmosphere). The plasma at the Sun’s surface is heated continuously, up to a point where the Sun’s gravity can no longer hold it down. Strong solar eruptions, called solar flares, and coronal mass ejections produce streams of high energy particles which flow through the solar system reaching the Earth. Here, electrons and protons are drawn into the magnetic field, moving along its field lines towards the poles. Since the Earth’s magnetic field enters and exits the planet from the poles, the protection from high energy particles at the North and South poles is reduced. High energy particles are hence able to penetrate within the atmosphere. In the region between 100 and 500 km above the ground, the aurora forms. 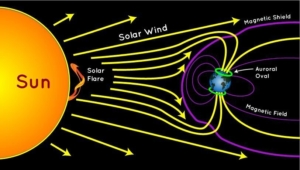 Electrons from solar winds collide with oxygen and nitrogen gas in the ionosphere and knock electrons out of their shells, forming excited ions. The oxygen and nitrogen ions will release energy in the form of light to regain a stable condition. The aurora colors depend on the wavelength of the light emitted and hence on the type of gas that is excited. For instance, atomic oxygen (O), which is present in the higher layers of the atmosphere, is responsible for the red color, whereas molecular oxygen (O2), present in lower atmosphere layers, is responsible for the most commonly seen green color. Nitrogen is hit more rarely and produces pink and dark red light. 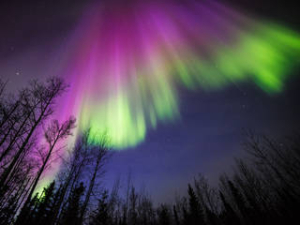