There are three main ways to get faster on a bike; get stronger, get a lighter bike or become more aerodynamic.

Since getting stronger is hard and a lighter bike is expensive, the easiest way to go faster on a bike is by optimising aerodynamics.

One component of drag is the difference in air pressure in front of and behind you. Shapes are developed by using computational fluid dynamics (CFD) and wind tunnels. The most aerodynamic shapes are often these teardrop-shaped “aerofoils”, and these shapes influence the design of helmets and the tubes that make up the bike frame. 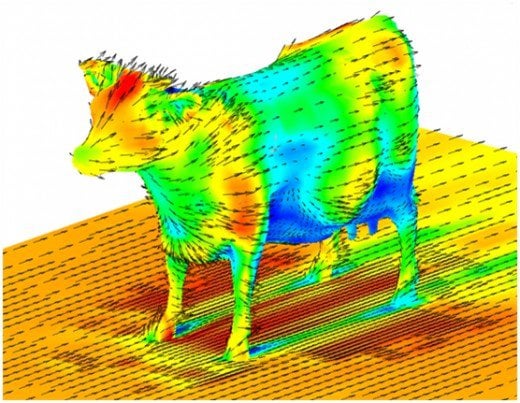 A popular joke in CFD is the aerodynamic cow, here the colours indicate the intensity of the wind drag.

Where ρ is the air density, A is the frontal area, C_D is the drag coefficient and v is the velocity. This means that at higher speeds the drag force increases a lot. Since we’re trying to go fast anyway, this doesn’t matter. The most important variable here that is easiest to manipulate is the frontal area. A cyclist wants to make their frontal are as small as possible to decrease drag. They can manipulate this by simply using a bike that is designed to be more aerodynamic, with complicated carbon layups that incorporate aerofoil shapes into the leading edges of the frame and with deep section wheels that decrease turbulence of the wind as it passes by the wheels. But the easiest, and cheapest way to decrease frontal area is to bring your elbows in or lean forward more.

The third cyclist in the figure is the most aerodynamic but is also the least equipped to delivery power into the pedals to propel themselves. Hence, this position is usually only adopted when they are going so fast that the cyclist is no longer able to pedal at a cadence that actually makes them go faster, having to rely solely on aerodynamics to gain more speed. Because of this, many different variations of the “supertuck” have been developed by prominent cyclists.

In 2021, the Union Cycliste Internationale, or UCI, the governing body of professional cycling banned the “supertuck” position (sitting on the top tube, as seen in the “Froome” and “Top tube safe” positions) from races, deeming it too dangerous and unsafe. An even more extreme and dangerous method of reducing frontal area can be seen in the following video.