You get out of the car after a long drive and go to push the door closed. Zap! You feel a nasty little sting as the car door handle shocks you. You know that it was an “electric shock”, but why did it happen? What’s electricity doing in the door handle? There’s actually no “electricity” in the door handle, not exactly.

You might have heard of electric charge; this is what makes the balloon attract your hair after you rub it on your head for a while. There is positive and negative electric charge, and opposites attract. How does this relate to the balloon? Well, when you rub the balloon on your head, something called the triboelectric effect comes into play. The triboelectric effect happens when there is contact between two suitable materials, and they trade charges; electrons from your hair are transferred to the balloon, leaving your hair positively charged (your hairs repel each other, standing on end, because they all have the same charge), and the balloon negatively charged. Then, moving the balloon close to your head, you notice that your are attracted by the balloon, which matches up with what we said about opposites attracting. 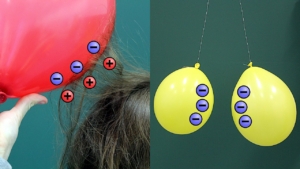 As you might have guessed, this “static charge” is what is on the surface of your car just before you get shocked. Your car accumulated this charge as you drove, but you, inside the car, didn’t. To introduce new language, there is now a voltage difference between you and the car; put simply, this means you have different concentrations of charge. Now we’re getting to the idea of electricity. Remember that the car now has some charge. The fact that like charges repel means that all of this charge desperately wants to spread out away from itself; this causes it to spread to the surface of the car body. But these charges would love to spread out even more, if given the chance; such a chance presents itself when you bring your hand close to the handle of the door. If given the choice between the rest of the car body (charged) and your skin (uncharged), the charges in the door handle seize the opportunity to spread out further once your hand comes close enough. Ouch! Charge jumps the gap and flows between you and the car, bringing you to the same potential (or in other words, to a point where charges are shared between you and the car such that both are equally undesirable places for charge to flow to). This flow of charge from one place to another is called electricity, and you’ve just experienced a brief electric shock.

Everyone knows that you don’t die from a static shock from your car, that happens when you stick a fork in a power outlet. What if I then told you that your car-shock measured in at around 5000V, whilst your outlet only supplies 120V? This is only counterintuitive because of the way it’s been presented. There is another important quantity when it comes to electricity which I’ve neglected to mention; electrical current. Measured in amps, the current is a measure of how much charge is flowing over time. If twice as many electrons are flowing in a second, then there are twice as many amps. Thinking back to voltage, we recall that it’s essentially a measure of how many more electrons there are in place A compared to place B; we know this means it’s indicative of how much the electrons want to move from A to B. It does not talk about how many electrons there are that want to move. 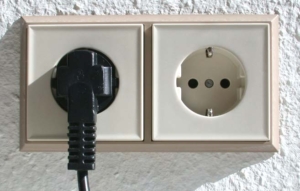 The number of amps, the current, is what really does damage to your body. Simply put, the body does not like electrons quickly and forcibly moved through it; this damages cells and interrupts vital bodily functions. Now let’s properly compare the car door to the power outlet.
The car door has a voltage of about 5000V, but when it flows to your hand it’ll flow with about 0.01A. Additionally, it only flows very briefly. The high voltage actually allows it to jump a small gap from the handle to your finger, but the low amperage means that it only stings a little.
The outlet has a voltage of 120V, but an amperage of about 15A. This is likely to kill, especially since the shock is likely to last longer than a static shock. The lower voltage means that your hand can be a lot closer to the metal contact without charge flowing, but when it does it will be much more damaging.
For an extra refence point, if you are struck by lightning the voltage is around 300 million V (the charges arc a long gap through the sky) and 30,000A. The only reason anyone ever survives being struck by lightning is because it’s such a brief occurrence, and even still death is very likely.

How Much Current Can The Human Body Withstand?