With the success of detecting gravitational waves, a new branch of gravitational astronomy emerged, allowing us to explore the universe in a radical new way. While detectors like LIGO can successfully detect waves from stellar mass mergers with frequencies on the order of 100 Hz, they don’t have the sensitivity to probe more interesting, lower frequency waves from sources such as galaxy mergers or the gravitational-wave background. To increase sensitivity, the scale of the detector must increase. This imposes a serious limitation to earth-based detectors. Future projects such as LISA, a space-based interferometer, will greatly increase the scale, with promises of millihertz detection. However, there is another method, Pulsar Timing Arrays, that can effectively create a galaxy-sized detector, allowing us to probe the most exotic gravitational waves in the nanohertz regime.

Neutron stars are stellar remnants left over from the cataclysmic deaths of 10 – 25 solar mass stars. They are extremely dense, at around 1 solar mass with only a 10 km radius. From angular momentum conservation, these neutron stars can reach incredibly fast rotational rates. The fastest ever recorded reached over 700 revolutions per second, translating to an equatorial velocity of nearly 25% of light speed! Neutron stars slowly convert their rotational energy into magnetic dipole radiation. This radiation (predominantly radio waves) is channelled via powerful, billion Tesla magnetic fields into tight beams coming from each pole. If the magnetic poles are misaligned with the rotational axis, a distant observer may see a pulsar, characterised by a “lighthouse” effect as the beams pulse past the observer in extremely regular intervals. 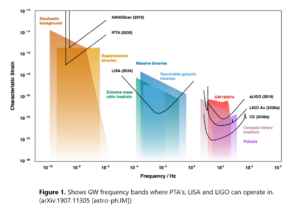 A pulsar timing array (PTA), uses several such pulsars scattered throughout the Milky Way galaxy and searches for tiny deviations in the recorded pulses, potentially caused by gravitational wave distortion. By analysing correlated deviations across several pulsars, extremely low frequency gravitational waves can be detected, and their source location estimated. There are many potential phenomena that could be observed using PTA’s that otherwise would be impossible to detect.  While detectors like LIGO are limited to stellar mass mergers, the main target for PTA’s are supermassive black hole binaries formed from galaxy mergers. Almost all large galaxies have supermassive black holes at their centres. When these galaxies merge, the black holes orbit each other at vast distances producing very low frequency gravitational waves. By studying the properties of these waves, novel information can be discovered about the distribution of galaxies and their formation & evolution throughout the universe1, 2.

A more ambitious goal of PTA’s is to detect the gravitational wave background (or stochastic background). A superposition of randomly emitted waves from innumerable independent sources scattered throughout cosmic space and time. The information contained in this background has large potential for cosmology. It could prove the existence of cosmic strings, 1D topological defects formed in the early universe, predicted by both quantum field theory and string theory3.  Detection of these objects could further test and differentiate between these theories. Another interesting target are primordial gravitational waves, created by cosmic inflation a fraction of a second after the big bang4. Currently, we can only use electromagnetic radiation to probe back in time to the age of the cosmic microwave background, at around 400,000 years after the big bang. No electromagnetic radiation can be detected before this time as the universe was opaque to light. Primordial gravitational waves don’t have these limitations and are one of the most promising methods to look back further to the very beginning of the universe.

There are currently three well-established PTA projects in the world. Europe’s EPTA, Australia’s PPTA and the North American NANOGrav. Combined they form the International Pulsar Timing Array (IPTA), using an array of over a hundred pulsars scattered throughout the Milky Way. No direct measurement of gravitational waves has yet been achieved, but upper limits to the gravitational wave background amplitude have already significantly constrained galaxy formation and evolution models.

The current limitation of PTAs is our radio detectors. Current telescopes struggle to isolate deviations in pulsar timings from the intrinsic noise in the observed radio spectrum. However, there are many exciting projects planned in the upcoming decades such as the Square Kilometre Array, that will drastically improve radio wave detection. With these next-generation detectors, and with more pulsars being discovered every year, Pulsar Timing Arrays will become very powerful detectors that will very likely revolutionise our understanding of the universe.