God particle and physicists’ grail, what is the Higgs boson and why is it so important?

Le Higg’s boson is elementary particle postulated in 1964 by three researchers, two Belgians, François Englert and Robert Brout, and then independently by the Scotsman Peter Higgs, even if history has only retained the name of the latter.

To summarise its function, it has often been said that “The Higgs boson is responsible for the mass of everything around us”, a shortcut that needs to be deciphered

Why do we need Higg’s boson?

Even though there are four different forces, physicists are trying to unify them in order to arrive at a Theory of everything.

The electromagnetic interaction and the weak nuclear force, for example, are unified in the form of an original force that links them: the electroweak force. Except that to bring them together in this way, the Standard Model ‘theory of everything’ faces a big problem. Each force has its own type of elementary particle.

The electromagnetic force is associated with the photon, while the weak force is associated with the W and Z bosons. This is where unification gets stuck: the expected symmetry is broken, because the photon has zero mass (hence the possibility of a “speed of light”), which is not the case for the very massive W and Z bosons. How can the theory of unification be sustained in the face of forces that are so different with respect to such an essential ingredient as their mass? This leads to several questions like how to take mass into account or explain the fact that different particles have different masses.

The Standard Model, already included all types of elementary particles such as quarks, leptons and bosons. 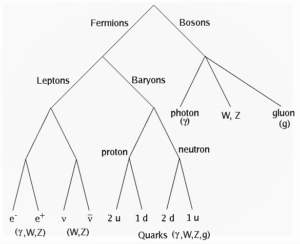 The protons and neutrons inside the nucleus of the atom are made up of quarks. The more familiar leptons are the negatively charged electrons outside the nucleus. Bosons are responsible for various energy fields such as electricity and light. But none of these particles explain the mass.

In 1964, the theory of the Higgs field was postulated to solve this problem.

To understand the mechanism of Higgs field, we can compare it to a group of people who initially fill a room in a uniform way. When a celebrity enters the room, she draws people around her, giving her a large ‘mass’. This gathering corresponds to the Higgs mechanism, and it is the Higgs mechanism that assigns mass to particles.

It is not the boson that directly gives mass to the particles: the boson is a manifestation of the Higgs field and the Higgs mechanism, which gives mass to the particles. This is comparable, in this metaphor, to the following phenomenon: an outsider, from the corridor, spreads a rumour to the people near the door. A crowd of people forms in the same way and spreads, like a wave, across the room to pass on the information: this crowd corresponds to the Higgs boson.

In a more physicist way, the Higgs field is everywhere and it has an effect even in the most total vacuum of space, it gives mass. Since the quantum vacuum is full of the Higgs field, aligned along a particular direction of the abstract space mentioned above, particles “parallel” to this direction will be able to propagate without constraint, but those “perpendicular” will suffer a slowdown due to the incessant interactions with the Higgs field.

Origin of the universe:

According to this theory, The Universe would be filled with a specific field that gives mass to elementary particles. This field was present at the Big Bang, but it was zero. The force bosons were therefore also empty of mass – including the W and Z bosons. As the Universe cooled, it spontaneously became charged. All the elementary particles that interacted with the Higgs field acquired mass, and the longer the interaction lasted, the higher the mass turned out to be. The photon did not interact with the field because of its nature, so its mass is zero; but the W and Z bosons interacted so much that they got their mass.

The theory looks good on paper, but to be proven, it must be observed. The fields of the Universe are all manifested, when they exist, by a visible particle. In the case of the Higgs field, this particle is called the Higgs boson. Only one thing was missing: to detect it.

Some words about the LHC:

Figure 2:The tunnel and part of the particle accelerator at the Large Hadron Collider

The existence of the scalar boson is too short to detect it directly: we can only hope to observe its decay products, or even the decay products of these. Events involving ordinary particles can also produce a signal similar to that produced by a Higgs boson.

Thanks to the Large Hadron Collider (LHC), the particle accelerator that started operating in 2008 near Geneva. In this 27-kilometre long circular tunnel, protons are accelerated very quickly, raising their mass very high and producing collisions – an ideal tool in particle physics. It is possible to recreate conditions similar to the primordial environment of the universe.

Two parallel LHC experiments, the ATLAS and CMS detectors, have detected a boson in a mass region of the order of 126 GeV, exactly where the Higgs boson was expected to be. It could be nothing other than the long-sought particle that proved (fifty years after the theory emerged)  the existence of the Higgs field.

The experimental proof of the Higgs Boson led to the award of the Nobel Prize in Physics to François Englert and Peter Higgs in 2013.

To conclude, the impact of this discovery is huge as it clarified the Standard Model of physics and further confirmed the idea of a unification of forces. Knowledge of the Higgs boson’s properties can also guide research beyond the Standard Model and pave the way for the discovery of new physics, such as supersymmetry or dark matter.