Camera as an optical instrument plays a vital role in the modern life. Its applications in sciences, entertainments, and communications had great benefits to our life. With the digital camera in our smartphones, we can easily capture and share moment of our life. The simplest model of camera is the pinhole camera, which operates with fascinating physics and optics.

The word camera originates from camera obscūra, which means “dark chambre” in Latin. It refers to the device which creates the optical phenomenon of the formation of an inverted image when light project an image through a small hole. The oldest known statement of camera obscūra was found on the work of Mozi, Chinese philosopher, during the Warring States Period 476-221 BC. The original statement in old Chinese states:

This statement has two different parts. Firstly, he described the light as arrows and how the image form under reflection. In the second part, he described the process of pinhole imaging which results in inverted image. I found this very interesting as the arrow picture not only correctly states the light ray travels in a straight line in the same medium, but it also coincided with much later idea of using vectors to formulate many optical phenomena. The phenomenon is demonstrated by figure 1, we can see how the image is inverted. 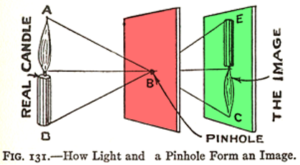 The pinhole camera can be considered as a small portable “Dark Chambre” without a lens but with a small aperture, the pinhole. It operated solely based on the camera obscūra. In general, the pinhole camera is a box with a pinhole located on the center of one of its sides. The figure 2 shows one of modern pinhole camera that I used before, the Harman obscura camera by Iford. It is a PVC box made of two locking sections, which has a 0.35 mm pinhole with a magnetic shutter, and it can be attached to a tripod. You can also create your own pinhole camera using cereal box, with some coloured tape you will be able to observe the inverted image by yourself. The photographic paper is usually placed at the back of the box 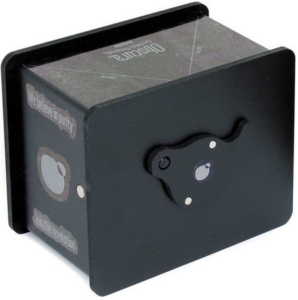 One may ask, why would someone use pinhole camera in our time, when we can just use the camera on our phone, and all other advanced modern camera with powerful lenses. In fact, the pinhole camera has many advantages over the other cameras.

Since there are no lenses on the camera, one would never experience lens distortion. Lens distortion is one form of optical aberration, which occurs when the lens failed to maintain a straight line straight from a scene to an image. The distortions are often irregular, the two most common distortions are the barrel distortion and the pincushion distortion, which you can see how they got their name from based on the figure 3. Distortions make the photos look different to our naked eye, which can be often experienced using a phone camera. It is not a problem for pinhole camera. 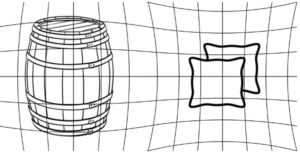 Figure 3: Two most common distortion, with their corresponding objects.

Another advantage is the ideal pinhole camera has a depth of field (DOF) of nearly infinity! Which means everything within the photo taken by the pinhole camera will be in focus. Since DOF is the distance between the nearest and farthest objects that are in focus in an image. Using the property of light travels in a straight line, we can immediately see that the smaller the pinhole, the more focused the image gets. Ideally, with a very tiny pinhole allows a single light ray to enter to a single point inside the camera will give the best resolution. It is physically impossible to build such camera in real life. However, we can find the optimal size of the pinhole.

The method of finding the optimal pinhole diameter was discovered by physicist Joseph Petzval,([2]) where the smallest pinhole would give us the highest resolution. The distance between it to the pinhole can be taken as the focal length for the camera, f. The optimal diameter of the pinhole, d for a light with wavelength, λ is given by

The Harman obscura camera that I mentioned above has a pinhole of size 0.35 mm. It has a focal length of 87 mm, taking the largest wavelength of visible light to be 700 nm, using the formula, we indeed end up with d equals to 0.35 mm! One can apply the formula when making his own camera for desired size photos.

Lastly, the pinhole camera has a long exposure time. Surprisingly, this has become an advantage for the camera. The exposure length depends on the temperature and the humidity of the location, which is often difficult to work with Irish weather and it requires time to master it to perfection. However, the long exposure time gives the unit motion blur in the picture for moving object with different velocity. Those are often referred as “ghost” in those photos. Digital camera to this day, still cannot recreate the similar effect, which makes this a unique feature for all pinhole camera photos.