Quantum mechanics is regarded as one of the crowning achievements of 20th century physics with it’s predictions backed up by countless experiments in the decades since its formulation in the 1920’s. Along with it’s success as a physical theory for all things microscopic it has also garnered notoriety in the mainstream for its perceived complicated and abstract subject matter and it’s reputation for being impenetrable to any layman. The reason for this singling out of quantum mechanics from the great canon of physical theories is due to its unique philosophical position in relation to the physics it describes, or better put: it’s not necessarily what quantum mechanics tells us, rather how we interpret what we are told.

To begin this discussion of interpretations of quantum mechanics it is best to start with the most widely accepted and universally taught interpretation, The probabilistic interpretation. This is the belief that quantum mechanics doesn’t tell us what has happened in a given system but more precisely how likely it is to happen in a given system. Within this framework we can imagine that all possible results of a measurement of a quantum system have assigned to them a particular probability which represents how likely one is to find the system in that arrangement when measured.

To clarify this idea we can consider a widely understood concept, Pokémon cards! We know that the only way to ‘measure’ what Pokémon we have is to remove the card from the pack and ‘observe’ it. If we know beforehand that there are only 3 types of Pokémon available, let’s say, fire, water and electric and we have heard from others who have bought the same cards that 20% of people get fire cards, 50% get water cards and 30% get electric cards. We can describe our card before we open it as follows:

All information about the card is represented in this statement (i.e. the type of card and the probability of getting it). We also know that after we open the card and ‘observe’ it we will only possess a single card belonging to only a single card type and it will not change. Therefore, (assuming we got a fire card) after it has been opened the card can be described as:

This change in the description of the card is fundamental to this interpretation of quantum mechanics and is said to take place instantly upon measurement.

The many worlds interpretation of quantum mechanics is an alternate interpretation which proposes a different view on the ‘collapse’ of the description of quantum systems. It states that every possible result of an observation is realised in it’s own universe. Using this point of view, at the moment when the card is opened we can imagine the arrow of time branching into 3 distinct paths and in each new path a different type of card was obtained.

This interpretation was formulated in the 1970’s with contributions from physicists such as Hugh Everett and Bryce DeWitt and aimed to resolve some of the paradoxes of quantum mechanics, the most famous of which being Schrödinger’s cat. While sounding like nothing more than a purely science fiction concept it remains a very real and respected academic hypothesis to this day.

When it comes to science and the supernatural, the common consensus is that the two areas are polar opposites and will never meet. The area of quantum mechanics, which is approaching the ripe old age of 200 years, continues to provide a great deal of confusion within the scientific community as to what it is that makes such an utterly baffling concept possible.

Quantum in a Nutshell

Now you may be thinking “big deal, particle go brrr” but I can assure you it gets weirder. In order to illustrate why the scientific community was and remains to be so perplexed by this field, we must first observe the results of the double slit experiment, the first example of wave-particle duality.

First performed by Thomas Young in 1802, the double slit experiment, as the name suggests, uses two slits in the surface of a solid material to create and interference pattern from an incident beam of light. This experiment was revolutionary in observing the physical properties of wave motion. 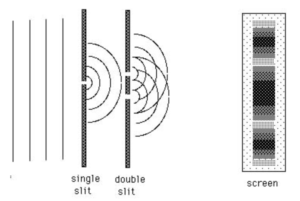 In 1927, in an experiment performed at Western Electric by Clinton Davisson and Lester Germer, it was proven that electrons could undergo diffraction and produce a diffraction pattern, thus proving the hypothesis of wave-particle duality, a fundamental building block of modern-day quantum mechanics. In 1961, the double slit experiment was carried out using a beam of electrons instead of light in order to see if they would produce the same result. Sure enough, the electrons produced an interference pattern on the screen.

So Young’s experiment shows us that electrons behave like waves. But we know that electrons interact with other particles in the same way a particle would. This wave-particle duality is what gives rise to the quantum-mechanical theory. An electron may act as either a particle or a wave at any given time. The real question is does an electron know when it has to act like one or the other? A common thought experiment details a detector being placed at the two slits so that the electron is observed going through the slit. Hypothetically, the interference pattern would not appear on the other side as before since the electron is observed passing through the slit in the form of a particle and therefore must continue to act like a particle. Richard Feynman used this thought experiment to prove that an electron must always act like a wave in this circumstance since this thought experiment cannot possibly be performed due to the impossibly small scale ([2] Harrison, 2006).

Feynman’s thought experiment can cause some confusion as it gives the impression that an electron could choose to act like a particle at the slit because it somehow knows it is being observed. Similar to other natural phenomena, if left unexplained by physics, many will jump to believe that a higher power could control such behaviour. Science has always been used to explain natural phenomena that were previously considered to be acts of witches, gods or the supernatural.

The idea that a particle could be granted some form of consciousness by a higher power is something that would very much excite those who believe in or are searching for a god. Simply put, however, that’s not how it works. The particle does not “choose” its state, it simply is. If placed in a certain condition where a wave will experience a certain effect (as in the double slit experiment) it will do so and will undergo the same process as anything else with wave motion. Like when a non-Newtonian fluid is put under stress, it will alter its form to adapt to its surroundings. An electron is still a particle but simply acts like a wave sometimes.

The probabilistic nature of quantum mechanics does give rise to some theories about alternate worlds in which fundamental particles were to act like particles where they would act like waves in our world. This “Many Worlds” theory is more the stuff of science fiction as there is truly no way for it to be proven. The fact that it cannot be disproven, however, is an interesting notion that finds itself appearing more in cinemas than in the lab.

The scientific community’s interpretations of quantum mechanics vary from the perfectly normal to the apparently bizarre. The notion that this field of study could prove the existence of parallel dimensions seems to be pulled directly out of science fiction. The idea that a particle can choose its state of being gives rise to a plethora of philosophical and potentially religious questions.

Quantum mechanics is clearly the most vital area of physics today and the sooner we can come to an explanation that can be understood by all, the better.