As simulations become more advanced and begin being able to mimic situations ranging from video games to complex star systems, it becomes increasingly difficult to determine whether we are living within such a simulation.

Although rather ridiculous sounding, Neil DeGrasse Tyson, a well-regarded astrophysicist, as well as the world richest man, Elon Musk, among others believe in the possibility that life is all a computer simulation.

In 2003, an Oxford philosopher Nick concluded in his paper entitled “Are You Living in a Computer Simulation” that we probability are in such a simulation and since then the theory that our reality is not the ‘Base Reality’ has been heavily discussed. Thinking back over 20 years ago the film, The Matrix, is based upon the premise that our reality isn’t the true reality.[1] 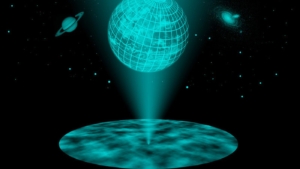 One hypothesis in support of the simulation theory is the Planck scale argument[2]. This argument suggests that at the earliest stage of the Big Bang when cosmic time was equal to Planck time the simulation was created. In this case then Planck time would be the reference point for the simulated “real time” and that the simulation would build itself using Planck units of mass, length, time etc.

Basically, this theory suggests that by taking the Planck units as the units which our simulator is based upon, we can create our own simulation of the Universe if it was simulated and then compare this with our observed Universe.  Complicated but can be done!

Since Quantum gravity and spacetime models of Universe use Planck time as the smallest discrete unit of time and by taking the age of the Universe (14 billion years) and converting this into Planck time it is possible to calculate values for the Cosmic Background Radiation, which is the observable radiation left over from the Big Bang[3].

In the table below the calculated values by using Planck mass and Planck length are compared which the observed values. These values appear to be very close with some even giving the exact number…[3]

Although this research has been conducted no one can truly be sure. Neil DeGrasse Tyson doubled back on his original support of the simulation theory to now being a strong disputer.

His reasoning for this change is that, if the Universe was a simulation, then we would be able to simulate another high-fidelity Universe. The fact that simulations to this level of precision are still out of our reach debunks this theory.[4]

But as technology continues to advance who is to say that this will not be possible, especially as quantum computing is becoming such a large field of research.

Although this theory is, just that, a theory, the ongoing development of computer simulations and the huge steps towards the future of quantum computing is a big factor into whether something like this could be the answer to the Universe, although without a more solid backing this theory remains a strange conspiracy. For now….

[4] Paul Scutter; “Do we live in a simulation? The problem with this mind-bending hypothesis”. Space.com, 21 January 2022