With the EU’s ambitious goal to be carbon neutral by 2050, it’s increasingly important to examine all aspects of our energy production, storage and usage. At present, buildings account for 40% of the EU’s energy consumption and approximately 75% of the EU building stock is energy inefficient (1). Therefore increasing the energy efficiency of buildings, could be one of the most effective methods of reaching our climate goals.

Although in countries with climates similar to Ireland we mostly focus on retaining heat in buildings, in hotter climates cooling is the most important feature of buildings. Air conditioning is one way to cool these buildings, but it is horribly energy inefficient. With many developing countries having hot or mixed climates, it is predicted that the demand for air conditioning will spiral out of control in the coming decades, unless we can find a better solution. Smart glass, may be this solution.

Smart glass, is a glass whose transmission changes when voltage, light or heat is altered. It can be used in smart windows to change the visible fraction of transmitted light. It thus, minimises the need for cooling and keeps rooms at a comfortable temperature. One of the technologies used for smart windows, are chromic materials. Electrochromic and photochromic smart glass are of particular interest. 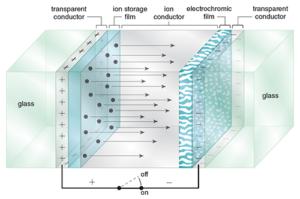 This results in the reduction of the band gap, which means photons with lower energy can now be absorbed by the glass. Electrochromic glass allows the user to control the amount of light by a flick of a switch which means they can regulate temperature or privacy. However due to electrochromic glass’s need for electricity, it is not quite as environmentally favourable as photochromic glass

Photochromic smart glass changes colour with exposure to light (4). It does not need any electricity to work, and is usually manufactured in the form of a thin film on the window. The thin films used are often photochromic rare-earth oxhydrides. As well as the benefit of not needing electrical power, the decrease in transmittance of rare earth thin films extends from the UV up to mid-IR (5). This means that photochromic smart glass can reduce solar thermal gain, which can often overheat a room. This in addition to the glass being able to reduce visible light. The main problem of photochromic smart windows, is their slow switching speeds and their stability over long periods. At present research is underway to try and address these problems.

If the problem of the switching speed could be addressed (at present it can take 5 minutes for the glass to return to a clear state), photochromic glass could have major benefits to the transportation industry. It would reduce glare for drivers and also reduce the need for air conditioning for passenger comfort. Electrochromic glass can also take a time in the order of minutes to change state, which again is a disadvantage for transport applications. However it has been suggested for architectural applications the slow switching speed of electrochromic and photochromic glass is an advantage, as it gives our eyes a chance to adjust to the change in light level (2). Electrochromic and photochromic glass are already utilised in industry. For example the Boeing 787 Dreamliner uses electrochromic windows to replace window shades in the aero-plane, while photochromic sunglasses are becoming more commonplace in everyday life. I expect that in the coming years smart glass will become even more prevalent, as we shift our attention to climate adaptive structures which can reduce are energy usage.