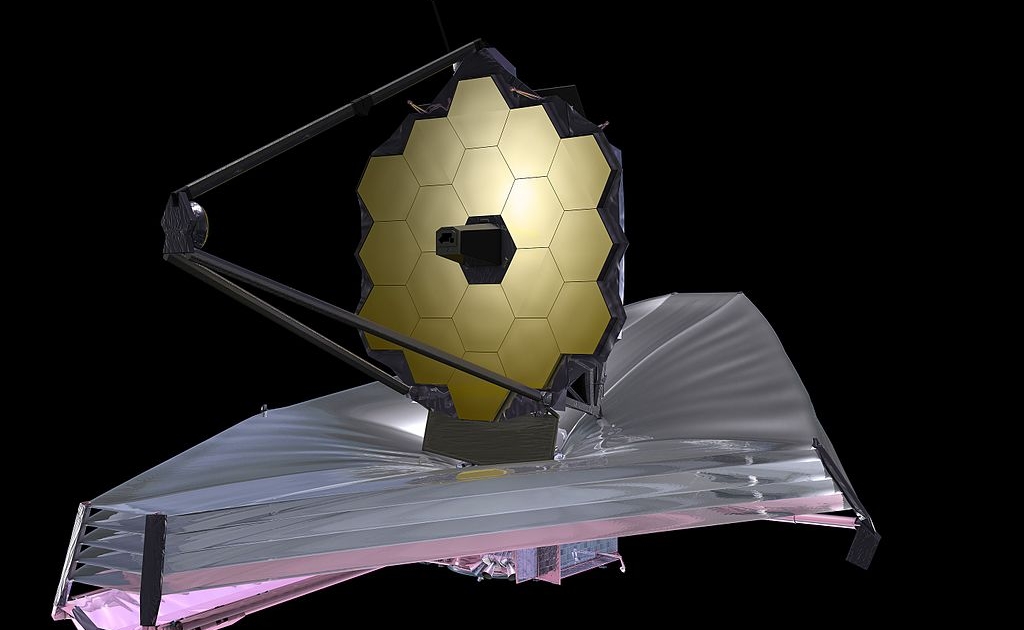 On 25 December 2021, the James Webb Space Telescope (JWST) blasted off into space after 20 years of numerous delays and almost unbearable anticipation. The telescope is the most advanced space telescope ever built, boasting a 6.5m primary mirror composed of 18 gold-plated beryllium segments which can individually adjust themselves to suit any target. Its largest component is the tennis court-sized reflective shield that allows it to cool down to around 7K (-266ºC!). A temperature any higher than this would prevent the onboard instruments from working correctly. This is because JWST will primarily be studying the universe in the near-infrared range where light wavelengths are between 0.6 and 28 microns. This light is the same kind that is emitted from warm bodies and, while not visible to the naked eye, JWST will be extremely sensitive to it. This means any heat radiating from the telescope itself would interfere with the telescope’s instruments and hence it must operate at an extremely low temperature.

JWST is the successor to the Hubble Space Telescope and has an estimated lifetime of about 10 years, depending on fuel consumption. This reveals a drawback JWST has compared to Hubble: refuelling. Unlike Hubble which orbits ~570 km above the Earth, JWST is nestled in a region of outer space called the L2 Lagrange point 1.5 million km away, too distant for a manned refuelling mission. This region is an area of relative stability caused by the interactions of the gravitational fields of the Earth and the Sun, keeping JWST in roughly the same spot all the time and allowing it to consistently block light coming from the Sun with its reflective shield. JWST has the capability to study very different parts of the universe to Hubble, however. As JWST works primarily in the infrared, it is able to peer past the clouds of dust and gas that absorb visible light, allowing us to see distant parts of the universe never before seen. As JWST peers further and deeper into the universe, so too does it peer further and deeper into the past, revealing the universe in its infantile stages many billions of years ago.

Although JWST is still in its instrument calibration stages, NASA recently revealed that the mirrors had aligned successfully and released the first image taken by the space telescope in a region of a nearby galaxy called the Large Magellanic Cloud. Below is a comparison between two photos of the same region, one taken by NASA’s now-retired Spitzer Space Telescope Infrared Array Camera at 8.0 microns, and the other taken by JWST at 7.7 microns. As you can see, the resolution and details provided by JWST are unmatched, a consequence of its larger primary mirror and improved detectors. 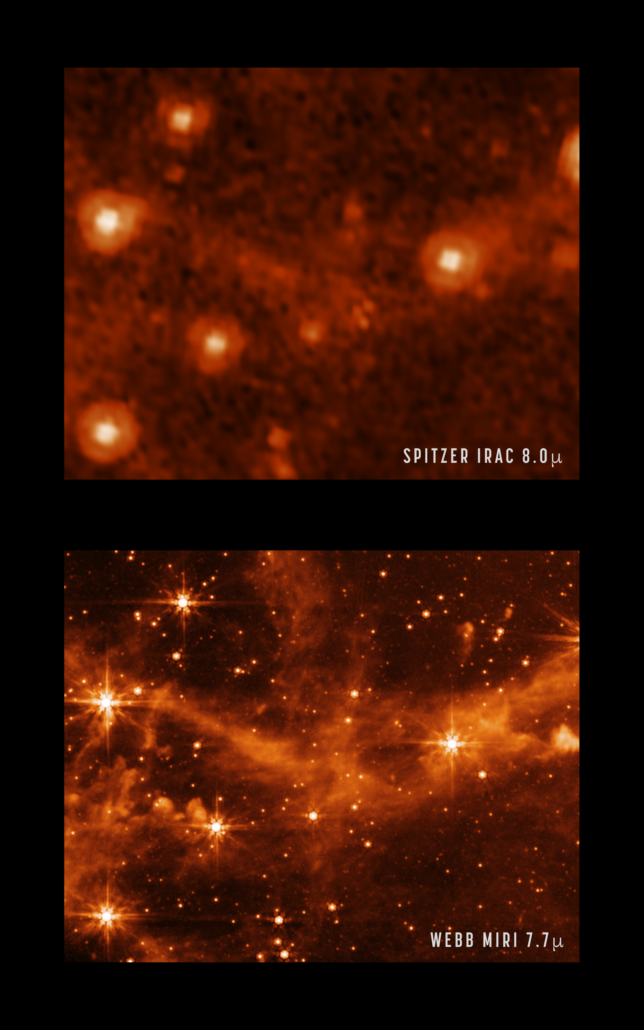 JWST used one of its four main instruments, MIRI (Mid-InfraRed Instrument), to image the above region. An example of how detailed MIRI’s imagery can get is the clouds of dust and gas that can be seen. These clouds are composed of “polycyclic aromatic hydrocarbons” which are molecules of carbon and hydrogen that play important roles in the thermal balance and chemistry of interstellar material.

Other than MIRI, JWST has three other main instruments: two spectrographs and one other imaging system, although all instruments have the capability to take images. The second imaging system NIRCam (Near-InfraRed Camera) is JWST’s primary imager, working in the region of 0.6 to 5 microns. NIRCam’s strengths lie in the imaging of the earliest stars and galaxies in the process of formation as well as younger stars in the Milky Way and even Kuiper Belt objects. 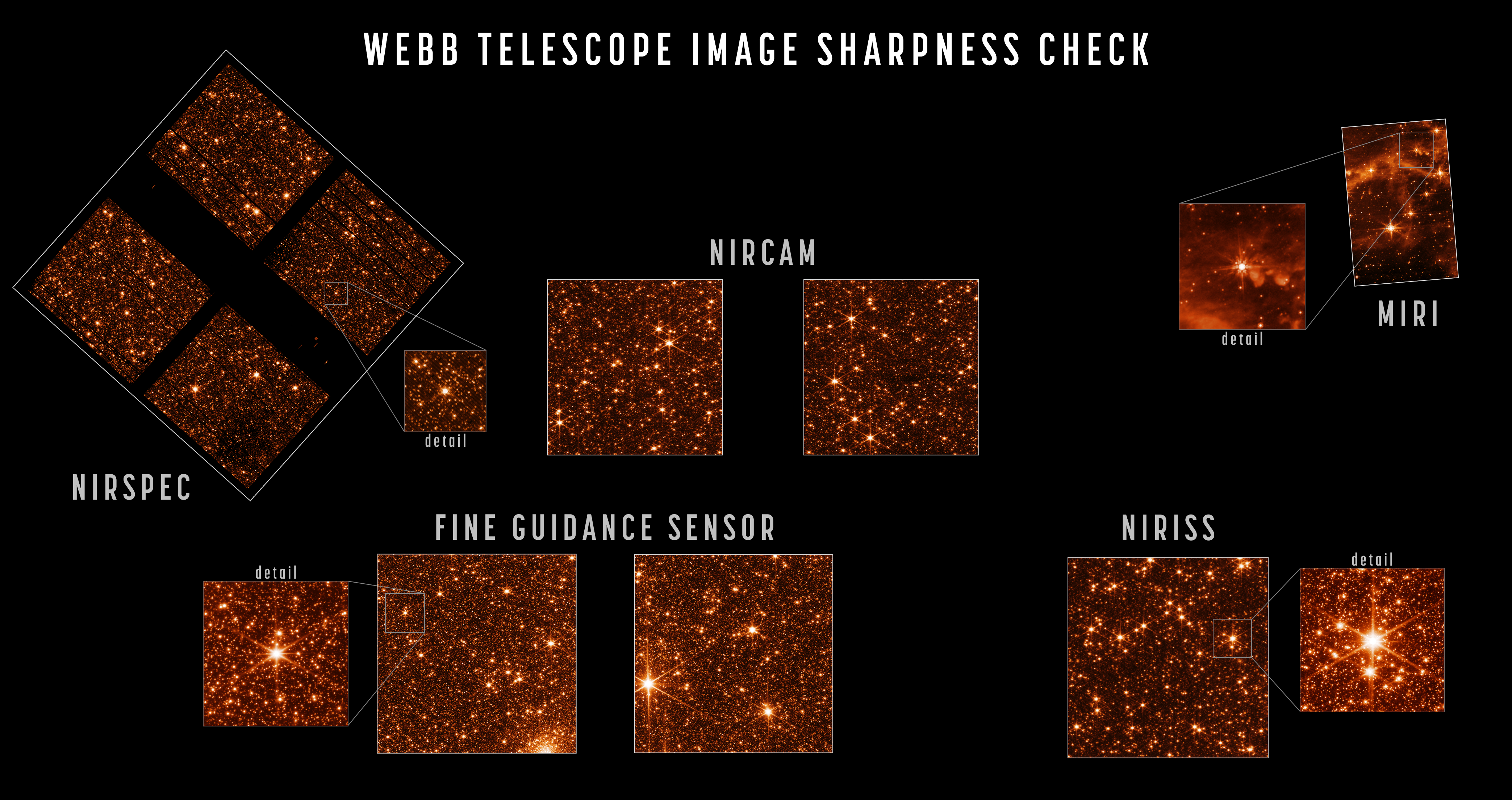 Fully focused images taken of each instrument’s field of view to demonstrate that the telescope is fully aligned and in focus.

NIRSpec operates over the same range as NIRCam and mainly focuses on light spectrum analysis as opposed to imaging. NIRSpec also has the ability to study 100 objects at once due to its innovative microshutter technology. This consists of an array of tiny shutters (each about as wide as a human hair) that can open and close individually, allowing light to enter the spectrograph from an array of different sources at once. JWST has to focus on the furthest and faintest objects for many hundreds of hours to collect enough light to undergo analysis, so being able to work on many objects simultaneously is hugely beneficial.  This means that over JWST’s 10 year lifetime, the temperature, mass and chemical composition of thousands of targets will be able to be studied. The FGS/NIRISS actually consists of two separate instruments. The Fine Guidance System allows JWST to point precisely at objects and allow detailed images to be obtained. The primary objectives of NIRISS are to detect and characterise exoplanets, operating in the range of 0.8 to 5 microns.

Instrument calibrations are entering their final stages, paving the way for hard science to begin this summer.  Over the next few weeks, it is hoped to test JWST’s ability to track objects in our own solar system which move much faster relative to it than distant objects. Additionally, JWST will undergo wavelength calibration to make sure it is correctly recording the luminosity spectra of its targets.

According to representatives from NASA’s Goddard Space Flight Center, the $10 billion space telescope is surpassing even the most optimistic of expectations. While more work still needs to be done to make sure JWST is in tip-top shape, astronomers and astrophysicists can look forward to getting knee-deep in reams of fresh data over the coming months.