There are two of Saturn’s many moons, named Janus and Epimetheus, that have an interesting relationship with each other. They are both small rocky worlds, only 196km and 135km across at their widest [1,2]. They both have nearly circular orbits at a distance of about 151,000km from the centre of Saturn. If you had observed where these moons were in the Saturn system last year in 2021, you would have found that Epimetheus was about 50km closer to Saturn than Janus, its slightly smaller orbit being inside that of Janus’. But if you were to look again next year, 2023, this would no longer be the case. Epimetheus will be further from Saturn than Janus and its orbit will be completely outside Janus’. This is because in 2022, Janus and Epimetheus will do something that they only do once every four years – swap orbits [5].

This interaction took place multiple times while NASA’s Cassini spacecraft was investigating the Saturn system before the mission ended in 2017. It first imaged the moons in 2005 two months before the moons switched places [3], and the featured image of this article is a close approach of the two moons that the spacecraft captured in 2010.

How does this switching of places between these moons work exactly? To explain it, it’s useful to think about some of the basic physics of orbits.

Suppose we have a rocket in a perfectly circular orbit around a planet (figure 1). If we point the rocket in the direction it’s moving in, and fire the engine for a short amount of time, it will of course speed up. As well as that, the extra energy given to the rocket from firing its engine increases the size of the orbit. The orbit will be stretched from a circle into an ellipse. The point in the orbit directly opposite the rocket, 180 degrees or half an orbit away, will move away from the planet. This point in the orbit, that is now the furthest point from the planet, is called the apoapsis. The point where the rocket fired it’s engine is now the closest point in the orbit to the planet, and is called the periapsis.

At the periapsis the rocket is now moving faster than it was in the circular orbit, since it sped up by firing the engine. But as it moves along the orbit, getting further away from the planet, it will slow down. It will be travelling slowest at apoapsis. When it passes this point and starts to get closer to the planet again, its speed will increase once more. This is all a result of Kepler’s second law of planetary motion. Without going into detail, it basically says that the further an orbiting object is from the object that it is orbiting, the more slowly it moves.

Figure 1: (a) a rocket in a perfectly circular orbit around a planet, arrows indicating the direction it orbits in (b) The rocket fires it’s engine for a short enough time that it doesn’t move too far in its orbit. (c) After its finished firing the engine, the rocket is in an elliptical orbit, moving fastest at periapsis and slowest at apoapsis. Diagrams by yours truly.

Now what about these moons of Saturn that swap orbits? Suppose they start out with the situation in figure 2, with the orbit of one moon being slightly outside the orbit of the inner moon (Since they switch, either moon can be Janus or Epimetheus). Now another of Kepler’s laws, the third one, essentially says that the larger an orbit is, the more time it takes the object to go around once. But this is not only because the orbiting object has more distance to travel, it’s also because it moves more slowly. If you google the average orbital velocities of the planets, you’ll see that they decrease as the planets get further from the Sun, mercury moving the fastest and Neptune the slowest. 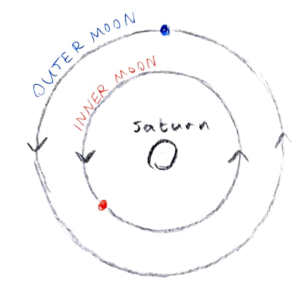 Figure 2: Janus and Epimetheus, either being the inner or outer moon, have roughly a 50km difference in their orbits. The inner moon in red, moves slightly faster than the outer moon in blue, meaning as time passes it gets further and further ahead of the outer moon. Distances/sizes not to scale.

They never actually get closer than about 15,000 km from each other[2]. But what happens is that the two attract each other gravitationally. The inner moon, being behind the outer moon, is pulled forward in its orbit by gravity. The outer moon, being in front of the inner one, experiences the same force pulling it backward. 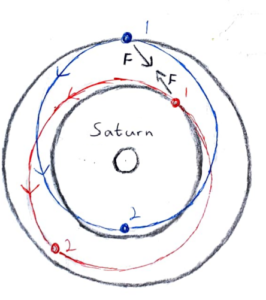 Figure 3: What WOULD happen if the gravitational force between the two moons were like a short burst like from a rocket, force F in diagram. The Moons start out on the black orbits. The inner moon is accelerated so that it ends up on the red orbit, with new apoapsis above it’s old orbit (red dot, position 2). The outer moon is decelerated so that its new periapsis is below its old orbit(blue dot position 2). Distances/sizes once again not to scale.

Just like the rocket in figure 1, the inner moon has a force pulling it forward, in the direction it is orbiting, so its orbit is stretched such that the point directly opposite it moves outward, the red dot in position 2, figure 3. Similarly, the outer moon is pulled back by the inner moon, so a force is pushing it in the opposite direction to its motion, so it slows down. What happens in that situation is the opposite of figure 1 – the point directly opposite the moon in its orbit will move inward. That point, the blue one at position 2 in figure 3, will now be the closest point in the outer moon’s orbit to Saturn, or periapsis.

If these gravitational forces were just short lived boosts to the moons’ speeds, as if they had rocket engines on them, their orbits might look like what’s seen in figure 3. But this is not exactly the case. Technically gravitational forces extend to infinity, so there is no sharp start or stop point for the moons’ interaction. During their close encounter, they are continuously attracting each other. The outer moon is continuously being slowed by the inner moon behind it. Its orbit is continuously being decreased in size so that in the end, it is on a nearly circularly orbit closer to Saturn than the used-to-be inner moon. Similarly, the inner moon’s orbit is continuously being increased by the forward pull of the outer moon so that it ends up on a nearly circular orbit further from Saturn than the used-to-be outer moon.

One other thing to note: Janus has about four times the mass of Epimetheus [3]. This means when the switching of orbits occurs, the change in Janus’ orbit radius will be less than the change in Epimetheus’ orbit radius. The gravitational forces attracting the moons during their close approach are equal. The same force on Janus, the heavier moon, will mean less acceleration – heavier objects require more force to accelerate them at the same rate. Less acceleration ultimately means less of an increase or decrease in the size of Janus’ orbit after the encounter.

Janus and Epimetheus are the only known example of this particular kind of “co orbital relationship” in our solar system [1] and an example of some of the strange things that are allowed by the laws of orbital mechanics.

[5] “Janus Moon and its Dance around Saturn: The Co-Orbitals”, The Planets.org 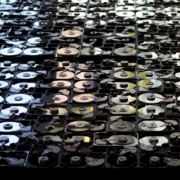 The Inherent Memory of Magnets 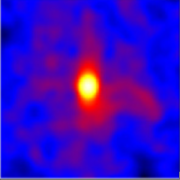 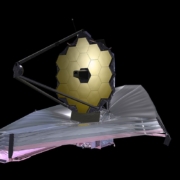 How cold can cold be? What is the lowest possible temperature?

Quark Stars: Are They Real?
1 reply