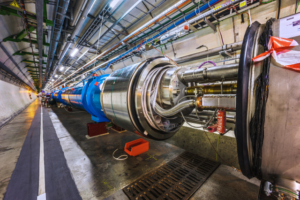 You may ask yourself the very normal, real question when you wake up of, what am I? what am I made up of on the smallest scale? how different is the stuff that makes up me from the bed I wake up on? When we get to the smallest scale, everything around us is made up of the exact same stuff called atoms and really they are only differentiated by their atomic number or how many protons they contain which can be seen by on any periodic table of elements. We find that even these atoms can be made up of constituent particles called quarks and you may question what other particles are there and how do all of these coincide to create the building blocks to our universe?

The year was 1897, the first elementary subatomic particle, the electron, had been discovered by J.J Thomson through the cathode ray experiment. With the discovery of the first fundamental particle, this had marked the beginning of this journey to discover the fundamental nature to reality. These experiments began to attempt to answer questions such as:  What is our universe made up of? Is the matter indivisible or can we get smaller? How do these subatomic particles interact?  The universe can be viewed analogously like a board of a chess game with the particles being the pieces and the corresponding rules of how they move or act are the laws that govern the universe that we try to discover through verifiable experiments. Can we discern the rules of how these particles interact with each other and our universe? Our current most successful Theory Of Everything, The Standard Model, attempts to explain this. 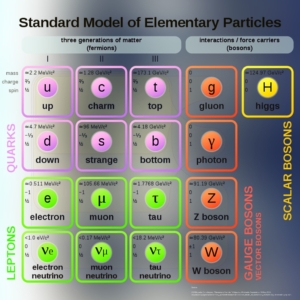 The Guage Bosons and the forces of the Universe:

Currently, there are more than over 150 discovered particles and this extensive list of particles is colloquially called “The Particle Zoo”. Just as the species of animals in a zoo can be grouped together based on their natural habitat, we can group together particles with similar properties and categorize them. Particles interact with each other via other particles acting as force mediators that transfer forces between particles. According to The Standard Model there are 4 fundamental forces to our universe. In order of increasing strength we have: Gravity, The weak nuclear force, Electromagnetism and The strong nuclear force. The range of gravity and electromagnetism is infinite while the nuclear forces have very short range. The weak nuclear force is of order magnitude 10^(-18)m and the strong nuclear force of order 10^(-15)m which is why we don’t see the effects in everyday life and only on the quantum scale. These interact with the particles through force mediators called Guage Bosons. Bosons are categorized as any particle with an integer spin such as 1 or 0. Just think of spin as an intrinsic property which is either spin up or spin down that we can measure just like charge of an electron. Trying to conceptualize what spin exactly is runs into the fallacy of trying to think of these particles just as spinning balls of charge except they’re not balls due to them being point like and they’re not spinning.  The force mediator particles for each of the forces are given by: Electromagnetism is mediated by the photon which is the constituent particle of light, for Strong nuclear force is mediated by the gluon, the weak nuclear force is mediated by the W and Z bosons and finally gravity is mediated by the hypothetical graviton. Also there is a Higgs field that permeates all of space and the excitation of this field gives us the Higgs boson which is the final Guage Boson. This field and it’s interactions is what results in the mass of all these particles which was recently discovered in 2012 at the LHC (Large Hadron Collider) in Switzerland. 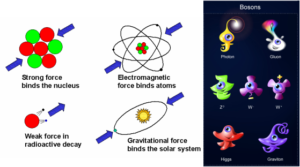 The electron, along with the muon and tau and their corresponding neutrinos make up what are known as Leptons. These are categorized as so due to certain intrinsic characterisitics such as not being able to  interact with matter via the strong nuclear force and only through the weak nuclear force. The first three have negative charge of -1 while the neutrinos have no charge and these are all spin 1/2 particles unlike bosons with spin 1 so they are also categorized as fermions. Leptons are fundamental particles and can’t be broken down to anything smaller. We have a more complex family called Hadrons which are strong interacting particles made up of quarks.  These are broken down into Baryons made up of 3 quarks which are like supermassive nucleons and Mesons made up of 2 quarks. All Mesons are Fermions and all Baryons are Bosons. Quarks are also leptons with spin 1/2 and consist of 6 types called flavours named up, down, top, bottom, strange and charm. The proton consists of up, up and down quark (uud) and the neutron is down, down and up (ddu). Up quarks have charge 2/3 and down has charge -1/3 which is why protons have charge +1 and neutrons have no charge.  These quarks that form protons and neutrons are binded together via the strong nuclear force and thus by mediating gluons as mentioned earlier. Another quantity that is intrinsic to note is strangeness and can just be thought as property just like charge.

How are physicists able to probe inside atomic nuclei on the smallest scale and discover all these particles? The answer lies in the usage of linear and circular accelerators. In the early days linear accelerators were used just as J.J Thomson used cathode-ray tubes to discover electrons. These take advantage of the magnetic and electric fields to accelerate particles from rest to very high speeds to collide with an object that’s called a target. Think of linear accelerators just  like a slingshot with a ball, the elastic potential energy when you pull back is like the electrical potential energy present in the accelerator when a current runs and builds electrical potential energy and letting go converts this potential energy to kinetic causing the ball or the particle to reach high speeds while passing through various electrodes and hitting the target. It’s linear since the path of the particle is a straight line. hitting the target can cause the constituent particles to split and these can be detected various way such as on a zinc sulphide screen. Circular accelerators come in the form of Cyclotrons and Synchrotons. These use magnets with uniform magnetic field to deflect the particles into circular paths. These particles accelerate to higher and higher speeds and eventually the particles coming in opposite circular paths cross and collide. Circular accelerators such as the LHC are much more useful as they can be confined to a smaller area and easily attain higher speeds in comparison to linear accelerators. Many detectors track the movement of charged particles moving through a gas, liquid or solid which show up as droplets in a cloud chamber. At the LHC they use solenoids to help identify these new particles.

All of this discussion lays the groundwork for particle theory. Symmetry is a of huge importance in all of physics. Symmetries lead to conservation laws such as conservation of energy or momentum. For the particles we have conservation of charge and other quantities in their interactions. If we consider eight spin 1/2 baryons we can plot their value of strangeness versus value of charge and the result is a hexagonal pattern. We can likewise do the same for nine spin-0 mesons. These symmetries accumulate together to form the eightfold way.  Current research in this field is trying to unify all four fundamental force interactions is the basis of the Theory of everything. We have unified electromagnetism and the weak force and is thus called electroweak interactions. The strong force has also been proposed to be unified in grand unified theories but this is still speculative. however there is trouble incorporating gravity into the mix and that’s what current research is trying to accomplish with one such example being String Theory. 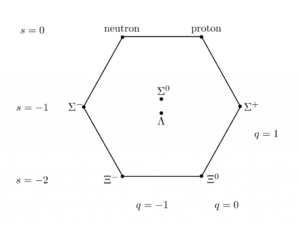 Fig 5: Plot of Strangeness(s) and Charge(q) for spin 1/2 Baryons showing the symmetry pattern in eightfold way.