Gravity is one of the four primordial forces of the Universe. There is even theories that believe Gravity was the force holding all matter in the universe into one “Singularity” before the big bang occurred. It is for this reason that is very easy for humanity as a whole to take gravity for granted.

Back when I was in sixth year of secondary school we used to always take the acceleration due to gravity on Earth (g) to be 10 metres/second. When I got to college we began to use g = 9.8 m/s for increased accuracy in calculations, but I always wondered how much of a difference that 0.2  m/s would make to our everyday lives and even more so if we just let g = 0.

To investigate this we have to first lay out what we understand the gravitational force to be. In simple terms gravity is just an attractive force between any two objects. In that same sense the force of attraction between us and the Earth is what is keeping you sitting in your seat as you read this. The greater the mass of an object, the greater the force of gravity it holds. For visualisation, 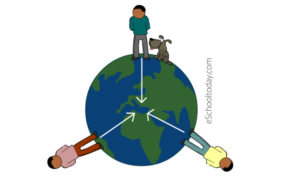 No matter where on Earth you are standing you will be pulled towards its gravitational centre.

Gravity can in turn be thought of as a curvature of space and time. The easiest way to picture this is to think about how a bowling ball in the middle of a trampoline would curve all space around it. This thought allows us to investigate our first system of no gravity. Our gravitational constant G can be considered a field in space and time. Therefore if we let G be a scalar field (a function that assigns a scalar to each point of space) and then allow the strength to vary, we will get a system with g = 0.

In a case like this there would be huge repercussions for the planet and everything on Earth. All landscapes would be flattened as there is force of attraction between objects. Everything being oppressed by gravity would fly off in whatever direction it was being held from down in. While this is terrible it is definitely the least of our problems . Our atmosphere would no longer be held together and of course no atmosphere means no air to breathe. All water on the planet would all disperse as-well. Earth would be utterly inhabitable. 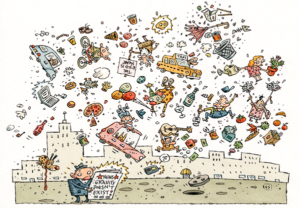 In another wild scenario to make gravity disappear we have to consider the elementary particle, Higgs-Boson. In short the Higgs Boson is part of a field aptly named the Higgs field. This field is essentially what gives mass to other particles like electrons. In order to acquire these masses the particles have to pass through the Higgs field. Let’s say this field is set to 0. Now the particles do not have mass and they can not effect space time and thus no gravity is created. The particles would now move freely with the speed of light. In this case the very atoms that make up everything on the planet would break down. Forget about floating away and being deprived of air, humans would disintegrate at a molecular level.

Doing research like this it is clear how important gravity is in our world and like G it is a constant in our lives.

The Era of Quantum Computers

The Particle Zoo: Building blocks to our Universe.

SO-CHIC: Southern Ocean Carbon and Heat Impact on Climate The path to a greener way of energy production
Scroll to top