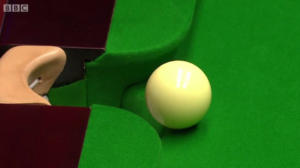 With the World Snooker Championship having just wrapped up at the Crucible Theater in Sheffield, Ronnie O’Sullivan saw himself equaling Stephen Hendry’s record number of seven titles after two weeks of grueling matches. While the commentators praised the players for executing spectacular shots, a physics student may find themselves attempting to recall lessons on impacts and collisions, and perhaps wondering if professional snooker players and physicists are more alike than we are different.

Snooker players often rely on striking the cue ball at an angle to the target ball in order to gain position for their next shot. Taking a shot straight on is undesirable as it makes it very difficult to change the direction in which the cue ball travels after it strikes the object ball. Mathematically speaking however, this type of shot is described very simply by Newton’s experimental law, which states that the ratio of the final and initial relative speeds of two bodies in collision is constant. This ratio is known as the coefficient of restitution and is denoted by the letter e. The value of e reveals interesting properties of the collision. Namely,

In the case of a snooker match, the player can manipulate the outcome of the collision by applying spin to the cue ball. This is achieved by striking the ball above or below the center of the ball. The diagram below gives a detailed visualization of the various ways spin can be applied to the cue ball. 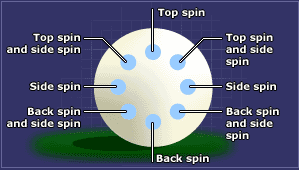 True professionals make use of side spin in conjunction with top or back spin to really take control of the cue ball and produce shots which may seem impossible to the uninitiated.

It may come as a harsh realisation to some that there is low correlation between knowledge of collisions and snooker ability. While it appears there is a certain element of luck involved in snooker, one certainty is that the laws of physics are at play and unlikely to find themselves snookered. The Particle Zoo: Building blocks to our Universe.

The Framework in which a Concept is Understood

Particle Spin is not a measure of how much a particle spins around?

What is pair production? and why does it happen?
0 replies

Consumer Technology : Are We At It’s Peak?
Scroll to top